A Review of the Modern Hell series by Virginia Locke

A Review of My Sexy Succubus Girlfriend by Aya Ocean 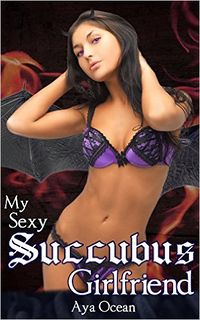 One of the most difficult things to find in stories about succubi is a mix of humour, knowledge, understanding and, most important of all, a desire to make someone else better. It isn’t about the sex, it isn’t about the erotica. It is telling a story, a good story. It is creating characters who are more than just sex toys. Managing to create that can make for some of the most amazing stories one can find.

Relationships are hard. There are always two sides, and if you cannot see who the other is, not what they are, then there simply cannot be one. Sometimes it takes a lesson to be taught before someone can find their soulmate. Sometimes that takes a succubus with more than a heart of gold. It takes a succubus that isn’t afraid to lead someone around by their nose and make them smell the roses.

Mika has just met a new guy at the park. He’s human, and to his delight, she is not. Mika has little black horns, a spaded tail, and small bat-like wings sprouting from her back. She’s a succubus, a demon that can sense emotions as if people were speaking them aloud. To her, this guy might as well be screaming ‘I just got dumped!’ every day. There’s something under the surface though, a pattern that this particular succubus is determined to break. Inserting herself into her new boyfriend’s life, she helps teach him the right way to value a woman, using her magical prowess to help illustrate her points. When he gets it right, the rewards aren’t just tangible, they’re downright exotic! After all, she wouldn’t be a proper succubus if she couldn’t transform her body to best seduce her chosen ‘victim’.

Evan finds himself dumped our of a relationship. Again. It’s not a surprise, he seems to be attracted to supernatural girls, they get along for a while, and then it ends with him losing one girlfriend after another. An encounter with a succubus named Mika takes him on a rollercoaster ride to learn about himself. Learning can be very hard when a succubus is the teacher, but more so when Evan learns the truth and what it means.

Considering that I am reviewing this work on Valentine’s Day 2016, it’s rather apt that this is a wonderfully told story of relationships, discovery, understanding and most of all, a very simple truth. Wonderfully written, the story is captivating from the first line and when Mika appears and her personality comes to the fore, I couldn’t turn away.

I dearly love Mika in so many ways that I cannot hope to list all of them. She’s an amazing character who, in a lot of ways, reminds me of a certain ebon haired, red tailed Queen of the Succubi. Mika is intelligent, has a wonderful way of getting to the point of a problem and gaining Evan’s attention but there’s more than that. Mika shows something that I dearly love in a succubus. She’s willing to teach another soul where they went wrong, but she doesn’t give them the answer on a silver platter, they have to work for it.

Even is, admittedly , very dense at the beginning of the work, but Mika pushes him, making him think, consider who he is and what he has done in the past. There’s a lot of character development as a result for Even, but the same can be said about Mika as well. Watching the sessions unfold reflects as well how Mika changes as Even gets his head on straight and learns the lessons he needs to.

The work mainly focuses on those lessons, which are funny, seductive, thought provoking and being so, while each scene is short, there is so much story packed into every one. The erotica does come eventually, but the work isn’t about the erotica, it is about the characters, their ongoing relationship, and how that turns into something more. Once the moment comes, the decisions are made, the erotica is the icing on the story, the treat that provides the climax to the story, but also rewards the characters for winding up where they are.

While it is part of a series, the rest of the series need not be read. The work stands on its own, tells a complete story, and in doing so provides for laughter, tears and enjoyment that I dearly loved. My single complaint is that the work is short, it ends on an amazingly funny dialogue between Mika and Even that offers so much more. I would have loved to see where things go from here, what the future brings these souls.

The writing is wonderful, the story and plot are solid, the characters are fully fleshed out, real, and have such personalities, especially Mika. The erotica is mixed through the work, a few very short teases here and there until the climax when the hot flash appears, which was perfect. Fully enjoyed, a wonderful surprise found and I am so very pleased I did.

It’s really wonderful to find a work in which there is story, character development, plot and more. Having a succubus which seems so very familiar in her attitude cannot help but make things even better. A new favourite in my collection and dearly so.