Lilith Aensland has a Tribute YouTube… and she has a tail in it.

A Review of Sleep Beside Me Always by Jenny Mercer

A Review of The Succubus Wore Green series by Benzi T. McKelly 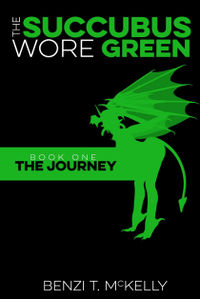 The Succubus Wore Green: Book One: The Journey by Benzi T. McKelly

A short Succubus story for review today on the Tale. It is a rare thing when within the pages of a story the characters break the fourth wall and talk directly to the reader. Sometimes that works, sometimes it’s odd, and when it is odd, it can really hurt what otherwise can be the most amazing of stories.

It is a difficult thing to create a world, make a story begin there, and then move off from there into a story that is, on many points, very much about a fish out of water… Or rather a Succubus trying to come to terms with the world of today… and then change it.

A young demon slave to a gorgeous, charismatic succubus tells of their harrowing journey to Earth, her inner struggles with her dark past, a series of incredible transformations, and the beginning of a mission to change human society forever.

Benzitae is the slave of the succubus known as Atalya and she is charged with telling her Mistress’ story. Along the way comes an angel, a problem, a world to conquer and a reality that is far too familiar to Benzitae in a lot of uncomfortable ways.

The work shows a lot of promise in that there is quite a lot of world building, the characters are full of life, thought, and passions. There is heart and soul in each of them, in their own ways, and that makes for the most interesting plots and events to unfold. Along with the story there is quite a lot of themes such as futa, some dominance, and a bit of slightly over the top erotica, but it isn’t really out of place with the themes and story as a whole.

The erotica does, on occasion, run a bit wild, and at times it need not have, but overall that didn’t overcome the book’s core plot. In the plot itself comes a lot of mysteries that begin, or are hinted at, but little else is told. Benzitae herself is a bit of an enigma, and as she remembers why she came to be where she is, that has a somewhat uncomfortable feel to it. There are moments which are in the middle of being light-hearted and then Benzitae remembers something and it falls apart. There is a purpose to this, but here it’s just distracting at times.

Atalya is, as a succubus, quite different in her physical nature and her overall character. She is futa in nature, is quite different in appearance as a succubus, and in that she is different, but in a unique way. I thought her personality was a little forced, mainly in how she related to Benzitae, and while there is a connection, even love at times, between them, it sometimes didn’t quite work as well as I had hoped.

The oddest part of this work is how often the two main characters turn, in the midst of the story, and comment about the reader, mentioning them, or rather alluding to them in a way. It is distracting in that the story was flowing well to that point, it goes off the rails for a moment, and then continues on, but for that moment one is drawn from the story and then it takes quite some time to be immersed in it again.

That all said, the story itself I really liked because it is different, it shows a lot of thought and most of all it gives an opportunity for a succubus to be more than “just a succubus” which I do like to see. But along with that comes so many questions and mysteries which bodes well for the series to come.

A good start, good characters, and there seems to be real care given to the story. I just wish it was a bit more consistent in the storytelling and the way the characters speak in, and outside of, the story itself. 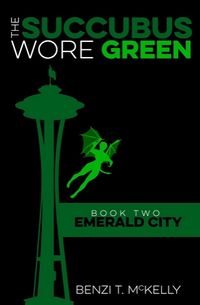 The next work in the series continues the story of Atalya onwards, telling more about her, her slave and the plans and goals they need to have unfold. But along with that comes still more questions and things to ponder.

Most of all, the problems are the ones of the mind, the memories within and just what happens when what you remember isn’t what you wanted to. But then, sometimes, you discover that the world is shades of grey and it is up to you which shades are yours.

Benzi and her succubus Mistress, Atalya, have settled in Seattle, hoping to turn their luxurious apartment building into an upscale brothel and a recruiting ground for potential demons. But as they discover their first new allies, Atalya’s unique condition suddenly locks her into an intense cycle of mindless pleasure. With her Mistress sidelined, Benzi is forced to push forward on their mission in completely uncharted waters. Inexperienced and still struggling with her dark past life, Benzi finds herself in places she never wanted to be…or never could have imagined.

Benzi has to deal with a series of problems on her own when her Mistress is unavailable. It’s not the easiest of things to do, but there are rewards, things to learn, and, sometimes, the rewards are not only the ones physically, but the ones that matter most within oneself.

If the first work in the series didn’t quite be all that it could be, the second most certainly is. While Atalya is only fleetingly in this work, she has an impact, but as well, she gives Benzi something very special. Her trust. It is a hard time for Benzi, many difficult things happen to her, but the thing is that, in being that she must think, act, and more on her own, the strength of her character comes through clearly and it is amazing.

There is a little side comment about a certain television series with a succubus hero, at one point, which makes Benzi’s name even more amusing that it was before. But the thing is, she is very much like her better known namesake in a lot of ways. There’s more to her, and that comes out in this story and I liked that a lot.

There is also the appearance of another succubus named Iris in this work, and her story, that of her soulmate and what happens to them both registered very strongly for me. It tells that there’s more to think about in this series than the erotica, the more sexual moments, even the points at which there is a lot of dominance and submission going on. There’s a theme of love and affection, for one, but also there is a theme of redemption for all and I really liked the tone of that. Not all see that, or have it, but it is there, in all its forms and I adored that.

There is a touch of erotica, but it is far less than the first work and I think that made the work better overall. There is humour, some of which made me laugh out loud, there is compassion, love and lust, but it doesn’t overpower the story.

Lots of cute and fun moments, the method that comes about to get two angels and a succubus out on the town for a bit was simply inspired and I give the author full points for the idea, but you’ll have to read this work to find out what that is.

The writing is better, there is less talking to the reader and that made the story flow better and kept me within the work more fully. The dialog is better, the story is tighten and the work has a point and a goal which it accomplishes quite well.

I really liked the second work more because it was a story, a good story and it held me throughout. Overall the series showed a lot of promise and I was hoping for there to be more. But that hasn’t happened as of this review and that’s a shame.

I like succubi that aren’t the usual and if they happen to be intelligent enough to see better things, including love and affection, then I am all for that.