A Review of The Succubus Wore Green series by Benzi T. McKelly

A Review of Sleep Beside Me Always by Jenny Mercer 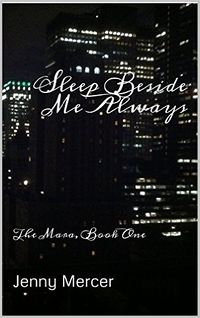 Sleep Beside Me Always by Jenny Mercer

A review this time of the first work in a new series called The Mara that tells of succubi and incubi in a complex and telling way. By that I mean the author didn’t fall into the trap of making their characters stereotypical by any means. That in itself was a pleasant surprise and then finding how much effort the author placed into this work, truly a novel on its own, was more so.

But the best thing of all, quite simply, is a singular truth in the work that endeared what the author created here. A story of succubi and incubi being more.

Tabitha Wood, drowned as a witch at 17 and reborn as a succubus, has never ventured far from home. Living in an abandoned factory in Lowell, Massachusetts, with her beloved incubus partner Sam, she spends her days immersed in paperbacks, her evenings with her ancient friend Meridiana, and her nights prowling Greater Boston for men who wouldn’t mind a particularly good dream. But when Sam takes a heroic risk to save a child, he alarms both the human police and the supernatural authorities– a pair of underwater spirits known as the Lady of the Lake and the Dark Mother. Now Tabitha must flee the only home she has ever known, and defend Sam from the wrath of their own kind– all while contending with the appetites and fears that define her. And when Sam reveals a harrowing plan to defy the Leaders and follow his heart, she must choose between obedience and rebellion– each with its own unthinkable consequences.

Tabitha and her partner Sam make a decision with consequences. Their future hangs by a thread, their world coming for them, threatening to end them. But along the way a secret is revealed and in being so they both have to make choices. None of them will be simple ones for the lives of succubi are incubi are like water and fire and when they mix the results can be catastrophic.

This work is a beautifully written love story with some interesting side plots and events that tell a story about the world of the succubi and incubi that I enjoyed greatly. The complexity at times can be a little bit difficult to read through, but in the end each moment in the story matters, they tie together and offer something really quite amazing.

The succubi and incubi in this work have their own mythos which is somewhat different from the normal stories told of them. As such, they have no horns or tails, they are not “evil”, unless of course they want to be that way. Their powers are slightly different, which is a good thing because it makes for some quite humorous moments when they speak of the modern world and how that complicates things for them at times.

The main character Tabitha is the heart and soul of this work by far. She’s funny quite a lot of the time, but along with that comes a reflective nature, considerations of her past, and the secrets she holds within herself. In a similar way Sam, her partner, is written as a force in the story equal to that of Tabitha, with his own secrets, needs and desires.

The telling of those aspects of both of them, what happens when they make a choice and what that means in the grand scheme of things creates a work that is quite unique, but also has the most interesting undercurrent running throughout. There is a moment in the work when a comment is made about good and evil and what the purpose of the succubi and incubi are and I thought it was possibly one of the most insightful statements made in a novel I have read in some time.

Besides Tabitha and Sam, there are other succubi and incubi that appear, as well as Cambions, and the complexities of that entire social arrangement was, to be honest, quite a sad thing at times. There is such a thing as love, need, passion. The question that comes up over and over again in this work is: What are you willing to do for that? It is a hard question to ask, and to answer it can be something which changes everything.

The writing is wonderful, the passions, the moments of need and fear are telling for all involved. The erotica is carefully written, blending with the story in such a way that it doesn’t take away from all that transpires. There are some points in the work where things rush by, leaving little time to consider what is happening, but that is a reflection of the moment. Overall the tone is right, the characters and their dialogue read well and there’s nothing that takes me from what is a wonderfully complex love story most of all.

If I have one thought about the work that I didn’t like, I feel like this work might have been split into two parts at a certain point. There is a lot of events that come together in this work as it was published and at times it feels like too much. Complexity is a good thing, and this work uses that well, but with all that transpires, all of the twists and turns, a little pause might have been for the best.

A wonderful work that I highly recommend by far. A complex story of love, needs, and desires both fulfilled and wanting. I am not sure when the next work in the series will appear, but I will be watching for it in anticipation.