Something for a Friend By Chi

A Review of Succubus Crisis by Dou7g and Amanda Lash

A Review of The Tainted Forest by John Dylena 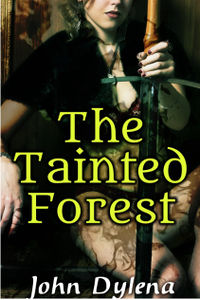 The Tainted Forest by John Dylena

A review today of a work by one of my favourite authors, John Dylena. While it is not particularly focused on succubi, there is a bit of an appearance of one in this work. Beyond that, it is a tale of fantasy mixed with a little gender swapping and a mystery to solve.

I felt it broadened John’s writing quite a lot and in doing so I felt that the world was quite telling, the characters interesting and more. Sometimes the search one finds themselves on isn’t the one they expected but the one they needed in the first place.

It was not only the wrong book, but it was the wrong magical book. A book that once opened, sent Luke flying into the magical world contained within the pages.

Only things are much darker than he realizes when he hears of the demons and vile creatures plaguing the villagers and after coming across a strange pink gem, Luke finds his body is slowly changing.

After a run-in with the demons, Luke discovers something lurking in his mind. Something evil, dark, and sinister, and it’s getting stronger each day.

Luke goes out looking for a book, finds one, and then finds himself in another world where magic is real and all of the joys and dangers that come with magic are there as well. Trapped and being changed, his adventure is just beginning, but he might not be himself for all that long.

The one thing about John’s writing is that time is spent weaving the world which the characters exist in. In doing so, that means each character, no matter how small, has a history, a means and reason for being in the story. This makes for a complex story with telling characters which, for me, is the best story to have of all. Luke’s experiences are well told, there is a hint of mystery, adventure and fantasy that works well together.

The gender change, as it unfolds, is not something over the top or obvious and in being so that allows for Luke’s perceptions to shift and the story to make some unexpected turns. How that works remains a mystery to the end, but it isn’t critical to know the why as the story itself fills in the why with the experiences that Luke has.

While some of that is erotic in nature, that doesn’t drive the story onwards. It is the adventure, the fantasy, the world itself and the exploration of that world that makes this something special. As part of that world, there is a succubus that appears as a minor character. She’s a little stereotypical, a bit evil and it is clear that she is so. The moment that Luke has with her has a bit of succubus mind control, a little domination, and there is a bit of futa erotica that worked well together and I liked the scene and how that fit into all else that happened to Luke.

The erotica, as a whole, mixes mind control, domination, a little tentacle and other creatures having their way with Luke as well. But it doesn’t feel out of place and I think, all in all, that it worked well to move the story onwards and drive Luke’s story towards its conclusion.

The work ends on a bit of a cliffhanger and I would like to see what happens to Luke beyond this work. There is a very good story here that leads towards a longer series. Perhaps at some point that will unfold in the same way as Brett’s story has in its own way and time.

Really a wonderful adventure-fantasy story with a little touch of gender change that was done in the most subtle and interesting way. A bit of a surprise with the ending and I would like to see this continue onwards sometime as it reads well and is captivating.