A Review of The Tainted Forest by John Dylena

A Review of Succubus Crisis by Dou7g and Amanda Lash 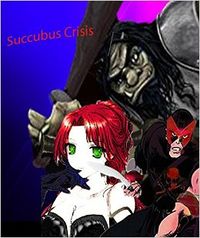 It’s been a little while since a certain redhead succubus, her “trainee”, a rather pointedly blunt Ogre, a smitten mage, her almost lover and the rest visited… well, not really Gilligan’s Island, but sometimes the laughter made me wonder.

I was quite thrilled to see that the series has begun anew with a little bit more focus upon the succubi of the series and a particular problem that Kendra, the redhead succubus of the story, has. And coming along for the ride are all of the things that I enjoyed in the first series, the characters I love and more.

This series continues the adventures of the characters from the series “Succubus Temptations” collected in “Succubus Journey”.

In this first installment of the new series the beautiful red haired succubus Kendra and her apprentice Helen try to recruit a supervillain assassin named Poison to kill her boss and set her free. To test him they make him fight Phil the ogre. He agrees because he’s always wanted to fight an ogre.

Kendra and Helen are on a quest and it isn’t quite the usual one. A wisecracking villain, his slightly dysfunctional wife and friend are asked to come along for a ride, and not just in bed either. But first there’s a little matter of a test, and Phil the Ogre is marking the results.

I’ve always loved the humour in the prior series and in this new one there’s no question that it has returned with all of the little in-jokes, witticisms, and silliness that I dearly love. From the start the undertone is there, quite clearly, and being so that makes what otherwise could have been some very dry moments in the work be filled with that little spark that I have always found.

Kendra and Helen have changed, but it is a very slight change really. The awkwardness that was present when they were last seen, mainly from Helen just becoming a succubus, isn’t quite as present and as such there’s a lovely interplay between the two that I couldn’t help but smile over. I like that there has been some growth between the last series and this one and I do wonder what has happened and how that will be explored.

The work mainly focuses upon Kendra and Helen on their quest and their encounter with a certain super villain that is as quick with their wit as Kendra and Helen are. The dynamic between them is really interesting and when the villain, who really doesn’t strike me as being “evil” so much as “looking to cause mischief” brings in his “partners”, then there comes a moment when I couldn’t stop laughing. Shoes are so very important you know.

A joy to read, the story itself offers a really good hook to follow what comes next. There are a few little spelling mistakes, nothing really terrible really. The characters’ voices are perfect, the ones we know well are every bit as wonderful as I remember, and the new ones introduced have their own style and personalities to share.

I hope that the “real problem”, when they appear, is as interesting a character as I hope they are. To learn about Kendra’s past along the way will be something i have been wondering about as well. The promise in this first work offers much and I think I shan’t be disappointed.

I really enjoyed the humour, the characters and really the ever-so smart storytelling that I have missed for some time now. I’m looking forwards to where this takes all of the characters, what the future holds, and who Kendra will be working her powers of persuasion upon next.

I can hardly wait…