The film is called Succubus… does it have one?

A Review of Slut Finder: Level 10: The Demon by Sasha Scott

A Review of Swapped by the Naughty Incubus by Sinn Lee 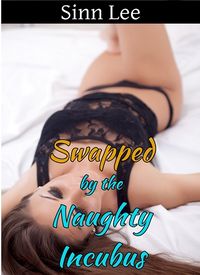 Swapped by the Naughty Incubus by Sinn Lee

Another work by Sinn Lee is what I shall be reviewing today on the Tale. It is a tale about an incubus needing something, finding it, but in doing so, having to change things.

It’s a neat little gender swap story, having little bits that are cute, emotional, and what I really liked, a bit of love and affection for a reason. Having a reason for why things happen is important, but also having that reason make sense makes for a better story too…

When David moves to a new town after landing a new job, he doesn’t expect his dreams to be the highlight of his day. His job turns out to be terrible, along with the city. Only at night, does he escape from it all. Strangely enough, his dreams take on a strange twist when he always turns into a girl when a shadowy demonic figure comes to visit him. What will David do when the dreams end and his gender-change becomes a reality?

As David dreams, his world is turned inside out by an incubus that needs something from him. In the aftermath, David is no longer himself and, now she, finds that things aren’t all that different in some ways, but very much so in others.

This work is a bit different than many of the gender swap stories that this author has written in that there’s more time spent on the characters, on the process and the aftermath than the actual erotica. This appealed to me because I felt more connected to the characters, what was happening to them and so on.

The incubus of the work is never named, but they aren’t stereotypical, and in many ways they are quite a bit different than most. As an aside, any incubus that can cook is, at least to me, something special. It seems to be clear he is an incubus, and the little snippets of how things work for him, what he can do and why, are really fascinating. I would have liked to know more about that, but the hints alone are something to ponder over.

Very little erotica really, it is much more romantic overall than some of this author’s other works that I have reviewed and really that works well here. It is about the transformation, the reason behind it, and what comes from it than simply the sex and I liked that a lot. Still, there were some issues that I couldn’t quite manage to get past and I really wish I could have.

There are some minor issues in the work however. It needs another editing pass for some spelling mistakes and a few points where some words were partially in all-caps. The main problem I had however was the lack of a name for the incubus. As the story turns towards something romantic, even loving, I found that he being called “demon” really bothered me. If in her new form David was to be his, then wouldn’t his name be known? As well, after his gender swap, David’s new identity is never touched on either. It is a bit of a gaping problem in the story for me and having those answers would have been nice.

Really a cute little work that has a lot of love and affection between the main characters that I think worked well. Some editing needed, a name for the incubus would have been nice too.