A Review of Plaything: A Tale of Demonic Desires by Raine Roka

The film is called Succubus… does it have one?

A Review of The Succubus Awakens by Carley Rose 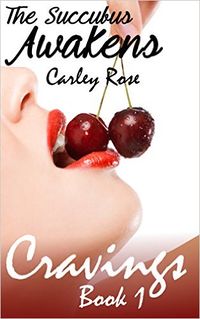 The Succubus Awakens by Carley Rose

A review of a new series that started this month about a Succubus coming of age who has no idea that she is one. The one thing about this work that bothers me to an extent is that the main character has just turned sixteen at the opening of the series. I find that uncomfortable considering all that transpires in the first work in the series. There is a logical reason, of course, but that alone isn’t enough I think.

Just saying that someone is a succubus isn’t enough to base a series on, there needs to be something which makes that mean something. At the same time, allowing the erotica to drive the story can, at times, work, but there is more to being a succubus than sex. Defining that part of the story matters.

‘The Succubus Awakens’ is the first in the ‘Cravings’ series, following Elle after she awakens and goes from being a normal teenager into the model of good looks overnight, somehow drawing people in with a power that feeds off of their sexual gratification.

There’s a force inside of her that needs to feed, to take the energy that the people around her have no problem giving to her. It’s temptation in it’s darkest form.

Can she control herself when faced with a hot incubus and werewolf that try to challenge her? Or will she allow her inner demon to do with them whatever it pleases?

Elle wakes up from a dream and finds that she’s not the same girl from the night before. She’s the centre of attraction, she seems to be able to control others, and there’s a need inside of her that she’s never experienced before. Encountering a boy that claims to be an incubus, she is told she is a succubus, and then things start to get complicated and out of control rapidly.

Elle’s path through this story is one of being lost, trying to understand what is happening to her, and making a series of mistakes in judgement, understanding, and with her lack of sexual experiences, combines into putting her into situations that feel odd when they happen. Elle throughout the beginning of the work is very innocent and really assumes that everything that is happening to her is because of puberty. In the end, that’s true, but it is her succubus coming of age that has changed her.

That becomes the focus of the story overall. How Elle tries to understand what is happening, how everyone around her acts. There are some well written moments of succubus mind control that I liked, but as well there was too many moments where the story could have been more focused on explaining the events but instead moved into a sex scene before getting to the next encounter.

There is something odd about Elle, and when she encounters Pete, an incubus at her school, that oddity becomes much more distinct and focused. But rather than getting further into explaining how things work in this universe, there’s a confrontation which leads to only more questions. If Elle can be said to have her humanity, Pete struck me as very much stereotypical in his personality and actions, which was disappointing. As well, the encounter is short, little comes from it, and in the end it seems like an afterthought than anything really of substance.

The climax of the work comes with a supernatural being confronting Elle and the events that come from that confrontation, which end with a mildly hot flash of erotica. The result of this being only to push the conclusion of the work towards a mysterious group and what that means to Elle.

When Elle attempts to learn about her nature, there’s a distinct slant to her thoughts, and from Pete, and others, that definition of what a succubus is. I’m hoping that the stereotypical assumptions made do not become how the series unfolds because if they are, that will leave me cold.

While Elle as a character has her moments, the rest of the characters seem a bit two-dimensional overall and the author needs to make Pete more interesting if he’s to be anything like a major character in the series. As well, while the vagueness of the opening work makes sense as to be leading into a series, there’s a feeling of too much happening in a short period of time. There was a reasonable point in the work where this could have been split into two parts, allowing for more development for Elle and the other characters and I think that should have happened.

There is the beginning of a series here, one that could be interesting, but having Elle being sixteen when everything happens is a little uncomfortable. That point isn’t dwelled on, really only noted at the beginning of the work, but it still makes for some encounters that are slightly concerning.

I don’t quite understand why she couldn’t have been eighteen, a little more “wise” or “adult” to begin with because if Elle was, then what she does with those she is close to in the series would make a lot more sense. Elle talks about her first “wet dream” at the beginning of the work, but when her powers come to the fore, there’s nothing “first” about her actions. She acts very much like a mature succubus and I can’t quite see how that works exactly.

There’s a lot missing, detail wise, in this work, but being there is more to come, I can accept it. But the ending is too abrupt, adds in a huge question, and then fades out with nothing more to be said until the next work. I will be looking for that, hoping for more focus on the why and less about the sex.

Elle’s story is about her coming to be a succubus. The sex isn’t who she is, or what she is. It is only part of the story. Telling that story, which I think is interesting, needs to be more of a focus than it is. That’s not to say the little flashes of the Elle to be aren’t hot, for they are, but losing who Elle is for her new needs seems a waste.