Succubi Image of the Week 419

A Review of The Succubus Awakens by Carley Rose

A Review of Plaything: A Tale of Demonic Desires by Raine Roka 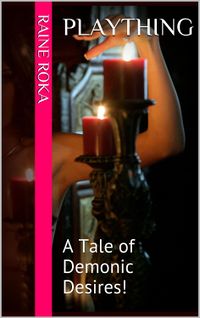 Plaything: A Tale of Demonic Desires by Raine Roka

There are some works in which the main character just rubs me the wrong way. Sometimes it is their attitude, their personality, or something more. Given that, as a whole, this is usually done for a reason, it seems to me that some sort of connection would be nice to have with that character.

Perhaps it is a quirk of the writing, some kind of problem within the story that just makes it not quite connect. When that happens, even the most amusing ending can’t quite overcome that issue.

When Howie Bell inherits his eccentric uncle’s country house, he hopes he’ll be able to sell it for a tidy sum. He decides to take a look around the place first, and discovers that his uncle was an avid book collector – and a practitioner of black magic! Howie can’t resist trying a spell to conjure up a playmate, and is rewarded with a demon who takes the form of a stunning, voluptuous vixen. Unfortunately Howie isn’t the sharpest knife in the box, and after some initial pleasure he discovers that a denizen of Hell isn’t quite the ideal partner.

Howie takes possession of his uncle’s run down mess of a house. Looking for something to sell, he checks things out and discovers a vast library. A book found, a spell cast and he finds that he has summoned a demon. A bit of fun, the tables are turned and he has a problem to solve. One way or the other.

Overall, the story idea is interesting and I was expecting something that would hold my attention. But the problem is, in short, Howie. As a main character he just doesn’t interest me, I really felt nothing towards him, and when things turned and went off the rails, I didn’t find that it mattered all that much.

Really, that’s a problem because getting past his speech mannerism, his attitude, and so on, what he does, how he manages to make it from the beginning of the story to the end is interesting and shows that he has, at least something, of a mind. But there’s just this style which gets in the way of my liking the story and I couldn’t overcome that.

The demon, which can be called a succubus, is for the most part very stereotypical and that didn’t do much for me either. Yes, she sexy at points, but then the usual tropes appear, things become less interesting and in the end there’s a bit of something there to see, but it’s overcome by the stereotypical behaviour.

There is some heat in the erotica, but again the style of the characters made it very lukewarm and as such didn’t hold my attention either. The writing itself is good, tells a story, and manages that well, but the characters just didn’t appeal to me.

The ending is, however, quite unexpected and I will admit that Howie’s solution is unique, makes a good deal of sense, and in that I found a bit of laughter in the ending that gave some enjoyment. But that couldn’t quite overcome Howie otherwise for me.

Howie just rubbed me the wrong way from the beginning and that carried on throughout the work. Even when the ending made for a laugh, that wasn’t enough to make me like the story. It’s a shame because the idea is interesting, I’m not sure how the story was told managed to make that work right or not.