A Review of Taming the Succubus by Eric Stray

I see the tacky in this costume, I don’t see the sexy 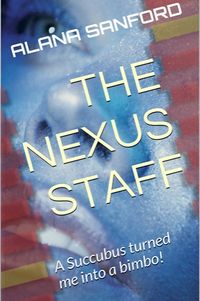 The Nexus Staff by Alana Sanford

The idea of a character taking their revenge through a succubus is not all that uncommon. Usually that means the succubus being the one to take the revenge, usually amounting to some sort of soul being taken in the process. It is a bit more rare to find a story where the succubus is more of the enabler for the character to find revenge themselves.

If that was all the story was, it really wouldn’t have much within it for me. However, sometimes a single line manages to make a story like that better than it otherwise would have been.

Roger lost his job due to three men who ripped the company off for money and got him blamed. Bonded to a succubus demon, Roger transforms to the woman of each of these men’s dreams, and uses their energies to devise an appropriate punishment for them.

Roger loses his job through the actions of three dishonest men. Meeting the janitor afterwards, Roger learns a few things. One, that magic is real, two, that succubi are real, and three, that his revenge will be quite a bit different than he had imagined it would be.

The story has a mix of themes within the pages. There’s a bit of a possession story, a little transformation, a smattering of mind control and then, in the end, it is all wrapped around the idea of getting revenge when being wronged. All of this focused on the idea that being joined with a succubus, and what she needs, can get what one might desire as their revenge.

It sort of works, though at times the story is a bit hard to read. There are, in the beginning, a lot of dry passages about watching elevators, avoiding conflict and there seems to be a lot of chaff put into the story for really no good reason. Rather that getting past the reason for Roger’s need for revenge, much time is spent showing why that is, what his life is like and then, as soon as the succubus appears, that just isn’t important to the story anymore.

The succubus, who is never named, appears for but a fleeting few pages in the work until she possesses, or rather merges, with Roger and their adventures in sex together begins. As that unfolds the succubus directs things a bit, wields a bit of mind control over Roger from time to time, but overall she acts as a means for Roger’s various transformations into women in order to have his revenge.

What follows from that is a series of three hot flashes of various levels, each with a different theme, one being a bimbo, for example. Roger’s personality is pushed aside by the succubus and he plays each role, being drawn into each sexual encounter and then obtaining revenge by using the piece of magic, and the guidance of the succubus to do so.

If that was all there was, really the work wouldn’t have much in it, being that the transformations are to some stereotypical themes, the story is overly focused on the sex, and so on. But it is the final page of the work when Roger explains something to the succubus which I felt told something about him that was unexpected considering the rest of the work.

The writing is a bit scattered at times, there’s some lack of direction and when the erotica comes into play the story doesn’t go very far. I wish it had, to learn more about the succubus, to see what Roger’s soul is like truly. There are some questions left in the aftermath which aren’t answered as well. The ending is a bit abrupt, I would have liked something more than the way it sort of ended, which is a bit off handed.