A Review of Taming the Succubus by Eric Stray 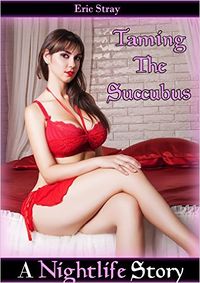 Taming the Succubus by Eric Stray

A review of the first work in a new series that I think has some rather interesting promise to it. While the work seems to have its focus on things other than Succubi for the most part, this first work in the series offers something that I haven’t seen many authors attempt.

Every succubus begins somewhere. They make mistakes, sometimes large ones, sometimes smaller ones. The thing about being a succubus is that the desires of others make you who you are much of the time. Holding onto one’s self can be difficult when the other is looking for one specific thing. Being lost within that fantasy can be costly or it can offer something unexpected. Discovering the difference is where the real story begins…

Mirri is a succubus on her first hunt. A supernatural creature able to live out any man’s deepest fantasies, she has only to find the right prey to begin her new life. Settling on a small, but well populated town, she quickly finds the perfect target… but all is not what it seems. As she shapes her mind and body to match his fetishes, she finds herself trapped as a busty, bouncy bimbo… a slave to her own needs. Giving in all too easily, Mirri begins to learn about an entirely different kind of nightlife…

Mirri is looking for a place to call home. Being a succubus, that’s not a simple thing to do. A small town beckons and she is attracted to her first prey. But things aren’t always what they seem. More than one surprise awaits her, and the greatest surprise of all might be the one that she never expected would be.

The core of this work is, as a whole, a kind of coming of age story mixed with a hint of surprise, mystery and the unexpected. This all combines into a work that manages to keep from being stereotypical in a lot of ways. Mirri, for example, isn’t a stereotypical succubus. The people she encounters aren’t exactly what they appear to be, but that doesn’t lead to bad things happening. In fact, that is the charm of this work. There’s not a hint of “evil” or “nasty” to be found. There’s a story of discovery on Mirri’s part, the finding of herself, and a place to call her home.

Mirri is the main character and succubus of the work and while she has some expected succubus traits in her form, she isn’t a typical succubus. Being so, I was attracted to her, who she is and what she believes in. The little tidbits about her sisters, and one in particular made me smile, made her more “real” and being so I became invested in what was happening to her.

Along the way, Mirri does transform herself into a bimbo, which is actually rather funny in how that plays out. The secrets of where she is, and who she is with however, are kept hidden well enough that the actual things that happen, what they mean, aren’t explained until the conclusion. There are some red herrings here and there, but they don’t take away from the heat of the story when it comes, nor the experiences of the characters involved.

Along the way, Mirri encounters Rachel, and she is a fascinating character on her own by far. She has a wonderfully blunt personality that meshes quite nicely with Mirri’s own. There’s a connection there, one that would have been interesting to see more of, but the seed of it, what it offers, I think worked well.

The story is well balanced between storytelling, character growth, and the moments of erotica that come along the way. There’s nothing silly or odd in the erotica, if slightly more bimboish in the telling than I really enjoy. When Miri is herself, there are some really interesting moments of self-pleasure that made me smile and mixing with that the telling of her story was a really nice idea that the author made work well.

The work sets up a universe that I think has a lot of promise to it. The explanation of how things work, why they do, makes sense and feels like the author has taken some time to plan things out well. The erotica is a scattering of a few short hot flashes, but they aren’t out of place within the telling of the story.

I would have liked to know more about Rachel than was told, and while much was told about Mirri’s past, there’s really no moment when Mirri, as herself, has pleasure as a succubus. It’s a bit odd as a result in that her “prey” holds her for the most part. I found myself wondering what the story would have been like if she had been herself more.

What I liked was the lack of either Mirri or Rachel being stereotypical in their Succubus natures. That alone hooked me into the story, but what came through the story, how things developed, added a lot to that. I wasn’t disappointed in what happened, more so I was pleased that the story didn’t turn towards being evil or nasty.

I think there’s a lot of promise in the series going forwards, though I am uncertain as to if Mirri or Rachel will ever appear again in the series. I hope so, I adore them both, who they are. The author took care here, I trust they will continue to do so with the series to come.