A Review of Angels and Succubi by Carl East

A Review of Sinful Amy: Promotion by Quixerotic 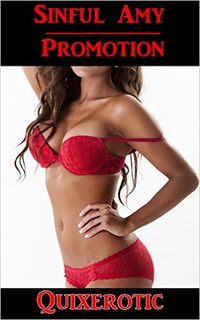 The theme of someone being offered a “deal” and then becoming a succubus seems to be happening a lot of late. Sometimes that story manages to take a turn where things become more than one might expect from the story itself. More often however the character in question becomes overwhelmed by their nature and the story devolves into a sex scene which doesn’t really have a purpose other than “it happens.”

That doesn’t really make for a good story, it leaves something wanting. Moreover, if the work needs all but the final three pages to set things up before the main character is transformed, that leads to an obvious question. Is this a work where being a succubus is an afterthought and there’s nothing more to be written, or is this the beginning of a series? Sometimes a little clarity can make the difference.

Amy, a goal driven business woman, has spent her entire career working for a promotion to the 32nd floor of the Paragon building. She comes to her interview ready to do whatever it takes to secure the job. When Levi is chosen over her, she turns to her favorite dive bar for solace. While nursing a drink, she is approached by a strange man named Alastor who offers her the deal of a lifetime. Determined to reach her goal, she signs the demon’s contract and quickly learns true meaning of lust.

Amy’s goal in life is to have a corner office in the company she works for. However, after losing out to her chance, she encounters a demon that offers a deal. She can have what she wants, but she will become a succubus. After signing the deal, Amy finds there are some benefits she didn’t expect and a need that she never expected.

The thing about this work is that a lot of time was spent in setting things up, laying out Amy’s past, then the events that lay out her future path and then making the deal. But the actual transformation of Amy into a succubus, never mind actually being one, lasts for three pages. It amounts to the discovery of her new form and little else, before the work comes to an abrupt close.

That’s a problem because in doing so, the question of what this work represents is left open. If this is a stand-alone work, then there’s so little of a succubus focus to it that it becomes a complete disappointment. If this is meant to be a series, then while it sets up the series, at least Amy’s path through it, there’s next to no time spent with her being a succubus. In that case, the work really is more about Amy being disappointed in her life, then making a deal and not really coming to see all it represents.

Amy’s transformation makes her somewhat stereotypical as a succubus, red skin and all, though the author didn’t mention hooves, so there might be something positive in that. But along with that  transformation, Amy’s prior personality becomes submerged beneath a succubus in heat. It didn’t quite sit right, all things considered. I would have been more interested if Amy would have kept her drive and somehow gotten revenge rather than the short hot flash that really didn’t have all that much heat.

The erotica in this work is about a page and a half in length, so this really isn’t so much erotica as it is a telling of Amy’s “here and now.” Story-wise, the reasons for Amy’s choices, how things unfold and so on I think worked well. There’s a reasonable explanation for her choice, how she approaches the offer that she is given by the demon and how that comes to pass. Amy is, at least in her human life, all business. What she is as a succubus isn’t really told well and that needed to be.

There is room for this story to go somewhere, for things to be more focused on Amy, her new role, and what she might do with it. But that’s not for certain. There’s no real proof of a second, or more, works to come. Should that be, I’d like to see Amy’s powers explored, perhaps seeing her have revenge on a certain character at the least. There are some interesting plot threads left open and if they are taken up, that would be nice. But if this turns into a series where Amy seems to be focused on sex and nothing more, that will be a real disappointment.

There’s really not much, if anything, of Amy being a succubus in this work and being so this leads me to the conclusion that this is the start of a series. We’ll see if that series appears, and if the author can manage to keep it from being something that will keep my interest. At this point, I can’t say that I really am.