Succubi Image of the Week 418

A Review of Daughters of the Night by Carl East 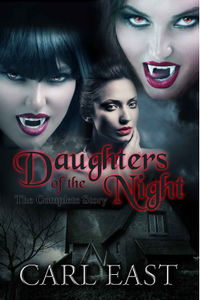 Daughters of the Night by Carl East

One of the story concepts that I have had the most problems with has been the idea that vampires and Succubi are seen as being the same kind of being. That, at least for me, isn’t right because there are a lot of differences between them. Not the least being that vampires are “dead” and Succubi are “alive” to put things at their most basic level.

Quite some time ago, one of the authors who’s stories about Succubi I do like from time to time wrote a work in which the worlds of the vampire and the Succubi collide. I wasn’t sure exactly how much I would enjoy this work in the beginning, but I found that by the end there was something within the pages that appealed to me. The idea of change, of becoming more, and doing something with that change.

In the night there are vampires. In one coven a vampire named Rebecca gains the powers of a Succubus in an experiment that changes her world and that of her coven forever.

The story of a coven of vampires who find their world changes as they come into contact with the Succubi. A sharing of blood brings about changes unexpected and with them the one thing they thought was impossible to see again returns.

The main Succubus of this work is Brandy, and she’s really not stereotypically presented in the story. She’s intelligent, she has a heart, and she cares very much about Rebecca and the rest of her coven. Brandy as most of the normal Succubus abilities, and a few more, one of which is that she can shift her gender as well. The most interesting part is when she teaches Rebecca about her powers and how to use them. There is almost a mother’s attention to her daughter learning and I thought that worked well overall.

Rebecca, the main focus of the work, is a vampire, but again she isn’t stereotypical, is told in a way that makes her more than she might be expected to be and I liked that. As she comes into her own succubus-like powers, there is moment when she realizes that she can do something that no other vampire can do as a result of her changes and that moment is possibly the most emotionally telling in the work.

However, the writing is a bit rough around the edges, some of the minor characters speak in a monotone, almost sleepwalking through the work. Part of this may well be the fault of this work being told in a series of short stories that aren’t quite linked together well. Perhaps connecting them together more fully would have helped in that.

There are quite a lot of little hot flashes of erotica in the work, and as a whole I think that was a bit overdone really. Some of them seemed to happen for the sake of having some erotica to get past a dull part of the story, and that didn’t quite work well.

I think that the author might want to go back and have another look at this work, rewrite things as this really is I think one of the weaker works they have written and it need not be. A better flow to the story, to the words is needed. Adding more emotion, more connections to the characters would be nice as well.

A well told story, some interesting concepts, and I liked the characters overall. I just couldn’t quite get past the concept of mixing up Succubi and vampires as a whole.