Someone There By JHB

A Review of Hell and Back by Anthony Quill 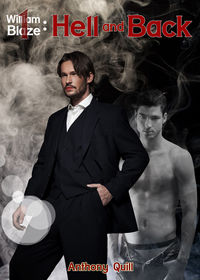 Hell and Back by Anthony Quill

There are some story themes which I find to be the most interesting. One of these comes to how an author tells of someone being transformed into a succubus. The more unique that is, the more I adore things because, as I have said many times, I do not like stereotypical themes and characters.

A modern day, bisexual magician in London. After Blaze had been missing for nearly two months, his former lover – a werewolf by the name of Sal – comes looking for him for help, despite being furious with Blaze. But Blaze wants his lover back…

Blaze is a magician. That in itself wouldn’t be too strange save that magic is real, he knows much of it and along with that comes the supernatural world that hides in the shadows. A werewolf for a lover, a woman possessed by a Succubus. Things are never boring in Blaze’s life.

The work was billed as the beginning of a series and it did continue onwards for a total of four works. Based on this one alone, I never managed to read the rest of the series, it is smart, funny, the characters are amazing and most of all… There is a Succubus who I found to be the most amazingly fun thing by far.

Shelley finds herself pulled out of her body and a Succubus takes her place. Blaze goes about finding Shelley in Hell, brings her back and then has the most interesting way to make both the Succubus and Shelley happy. He’ll just merge their souls together into one body. The overall story of finding Shelley’s soul isn’t told, save in passing and that was a bit of a shame. I think that would have been interesting to read. What was told was Shelley sharing Blaze’s body, she coming, and cumming, along for the right as he has fun with the Succubus.

It’s an amazingly hot scene, I especially liked that the Succubus was described as looking human, save for her wings and tail, and afterwards the reactions of the Succubus and Shelley, what changes occur and the last little comments by Blaze and Shelley made me laugh out loud.

But most of all, this was really the most amazing piece of writing in a work that was fun, had so much promise and delivered on every bit of that from the first word. All of the characters, Blaze, Shelley and Sal are just wonderful and so full of expression and life that it was a joy to read their thoughts, words and actions in the story.

The one part of the story that did give me a bit of pause was how Blaze kept referring to normal people as “Norm” and “Norma” which got a bit old after a time. It turned into a sort of running gag, one that I just didn’t feel matched up with the rest of the work and how Blaze spoke otherwise in the story.

Simply a wonderful read, characters that I cared about and wanted to know more about. Hot in the right way, smart as well. A work that I will remember for quite some time as it is, in many ways, unforgettable in its tone, story, and more.

Sadly, this work is no longer available. More so as the author made note that Shelley would be returning in the future in this series. I never managed to find that series, to see what happened to her. I really wanted to see Shelley being a succubus, being something more than she was before.