Someone There By JHB

A Review of Soul Mates by Carl East 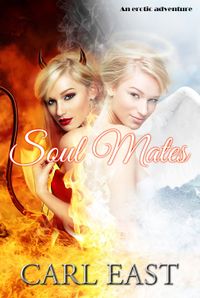 The idea of a Succubus and an Angel meeting, becoming close and then something more has always appealed to me for my own personal reasons. I like the story idea, how that flows, how each of them changes and what, in the end, all of that means to them.

I like to see that connection, the realization that in spite of all of their differences, the two sides of the universe they are from, there is middle ground and when the right seeds are planted, that becomes something special.

The only problem becomes when the ending doesn’t live up to the love in the story.

When Arianna (an angel in training) has to go out into the world to earn her wings, by saving a soul, she has no idea what awaits her. Brandy is a succubus and she’s on the run. She disobeyed Satan’s orders. When they both find one another, the strangest alliance you can ever imagine forms and a friendship is born.

Arianna isn’t quite an Angel just yet and she is sent to Earth to become one. A meeting with Brandy, a Succubus on the run and she discovers that Brandy is the key to her becoming an Angel. But the truth, for them both, is something more amazing to discover.

Overall this is a story about self-discovery, about findings someone to care about and to tell what one would do for them in the moments when all would be lost. I liked this story for this, but also for how well the lives of Arianna and Brandy are told, then joined together. There’s a good deal of innocence from Arianna, which I loved dearly. But I liked Brandy being an old soul and how that played off against Arianna and what that transformed their relationship into.

Brandy is one of the Succubi that I love the most in stories. She has a soul, a conscious, and most of all, she isn’t stereotypical at all. That mattered a great deal in this work and it added a touch of love and compassion that fit really well with Arianna’s own personality. Horns, wings and tail yes, but not at all what is expected of her. Or for that matter one of her Succubi sisters and that was lovely to see.

It is at this point, the last few pages of the story where the author lost me completely. The work ends on a note that just doesn’t ring true with all else that happened. It is abrupt and sadly of all, it ends on a point where these two lovers seem to be going towards having to face each other on different sides. That just didn’t set well with me. To end the story that was about love, about understanding, about being together by taking that and tossing it away just didn’t work at all.

There are also a number of editing errors in the work that need to be dealt with. Some of them are rather large ones that occur in the midst of some important moments and that’ s a shame as well.