Succubi Image of the Week 417

A Review of Punished by my Succubus by Harper Lewis 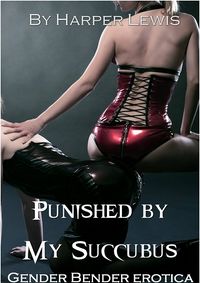 Punished by my Succubus by Harper Lewis

When a work is said to have a certain length, one expects that the story, in total, will be close to that number of pages. It is not, at all, acceptable to write a story and then have more than two-thirds of the work be advertisements for other stories.

It is even more unacceptable when the author leaves not a small handful of mistakes in their writing, but quite literally every page has a spelling mistake, a mistake in grammar, or worst of all, they cannot seem to keep the main character’s name straight from one page to the next.

When all of this happens, it does not matter that the story idea has promise. That just cannot survive so much being wrong.

Roped, naked and now a woman isn’t something Steven thought could happen to him when he woke up and went to the corner market.

When stolen by a naughty succubus Steven becomes Maryland, a beautiful, blonde buxom woman. Will Maryland be able to handle the painful pleasures his new Mistress and her servant Wyatt dish out?

Steven finds himself at the mercy of Cassandra, a Succubus who has plans for him. A spell used, her dominance set, Cassandra takes Steven and brings Marilyn to life. For Marilyn, that life is to serve her Mistress as best she can evermore.

You might note that I called the main character, after their transformation Marilyn, but the book summary calls her Maryland. This is just one of the many issues I had in this work. There are many instances where both names are used and the question is, of course, which one is correct?

Past that problem, the writing is clunky, uneven, has problems with tense and tone. There are moments where it is actually very hard to read the story because the words on the page do not connect together well. For example, Marilyn is told to kiss Cassandra’s hand…. and she kisses Cassandra’s lips. The disconnection at times in the story just takes away the heat from the scenes, the story idea, and most of all, leaves behind a story that just hasn’t anything within it.

In that, there’s little that held me to the story, even as I hoped for something to come out of what transpired. The work feels like it was written as quickly as possible, then the author’s catalog of stories was attached to the end, and then it was published. I somehow doubt there was even a single editing pass made.

This work needs a severe edit at the least, more story at the better, and, to make it something worth reading the work should be at least more than a handful of pages in what passes for a catalog of the author’s works.