A Review of A Demon’s Gift by Jocelyn Dex

A Review of Interview with the Succubus by Kara Lang 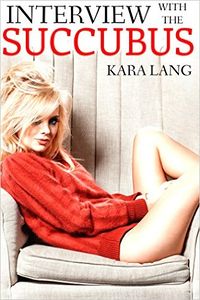 Interview with the Succubus by Kara Lang

There are those characters that suggest they are succubi, of some description, but really don’t quite appear to be so. They can be sexual, alluring, have some aspect about them that offers the possibility of they being a succubus, but never quite deliver on that.

A review of a new series in which the main character seems to be, in a lot of ways, unsure about what she is, as a whole. Perhaps that’s the point of the series, in some way, because that needs to be explained more than it really is.

Erythrina: a beautiful young woman, hiding a monstrous appetite. Mark: the skeptic invited into her home, to investigate her claims. After tonight, neither of them will ever be the same, as their destinies become linked by the same strange, impossible secret.

Mark meets with Erythrina, a woman who claims to have strange powers and abilities that Mark cannot believe. An interview takes an unexpected turn and Mark is faced with a reality that he cannot believe.

The work reads like the opening chapter to a novel in that the characters are introduced, the setting is explained and then the conflict, or discovery, is made which then pushes the story onwards. It is mainly story, trying to set out something about what Erythrina is, who Mark is, and what draws them together. Beyond that, there’s really not a lot else in this work.

Erythrina is a mystery for the most part, and even when she is trying to explain what she is, she doesn’t seem to be able to say with some kind of clarity. Is she a succubus? In a way perhaps. There’s more focus placed on her particular feeding method, and what that entails. As the main theme in this work is clearly noted, that is vore. While that leaves an impression in how that is described and so on, it serves mainly to force Mark to believe Erythrina’s story and not much else.

Once past the reveal, the story rushes through the conclusion and then ends at a cliffhanger which makes some sense at least. But that’s a shame because there was a good deal of time spent in the work telling a story, but then walking away from it in a kind of slasher-horror movie way which was disappointing.

Overall, there’s really no heat in this work, not much in the way of anything succubus-like happens. It really is mainly a tease for whatever comes next, whatever that may be. I would have liked a better ending, something more substantial. It would have been nice to know more about Erythrina than there is, if only to understand who she is, not so much what she is.

I’m not sure about this series, I’m not sure there is a succubus to be honest. I hope the next work in the series expands on things more and comes to some kind of explanation and resolution about those questions.