A Review of Interview with the Succubus by Kara Lang

A Review of A Demon’s Gift by Jocelyn Dex 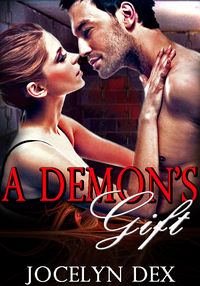 A Demon’s Gift by Jocelyn Dex

There are some questions which do tend to wrap themselves around one’s thoughts over and over again. Some of them are clear, focused, they speak what they mean and mean what they say. Other thoughts are draped in shadow, their truth held away, until the moment when they must come to the fore and speak the words that one never expected.

The question of one’s history can be the one question that can never be fully answered until the moment arrives and the truth reveals more than one knew.

Even if that truth shatters the world once known.

Cordelia is a demon hunter in training. Passing her final test will allow her the freedom to celebrate her first Christmas, but one demon stands in her way. As much as she tries to fight it, to convince herself he repulses her, her body comes alive, betraying her, each time he’s near.

Argoth, a sex demon, is locked in a cell, used as a punching bag for the demon hunter trainees. The only thing he looks forward to is his training sessions with Cordelia. The first time her fist connects with his face, he knows she’s different and that he has to have her, to save her, to make her his.

When Argoth’s truth turns Cordelia’s world upside down, will she give in to her desires or run for her life?

Cordelia has been training for longer than she can remember. Finally to the moment when she might be able to graduate, she has to face her own demon, quite literally. Beneath the words, the innuendo, the questions and more, there’s something hidden. Finding the unknown within and without can change everything, if she only would listen to the voices in her own mind.

The most telling part of this work is the way Cordelia and Argoth spar with each other over the course of the story. From the first moment, there is a connection, a reason for the story to unfold and that sets a tone throughout the rest of telling. Two strongly written characters who have their own wills, needs and desires. The internal struggles through which each must make their own choices, good or bad, and learn to deal with them. What I found the most telling of all was the histories of each. The secrets that are held in each of their pasts are not tossed out all at once, there is a reason for each part of the story to be told.

Argoth’s character tells of his honour, his needs, but always there is a fear within him that holds tightly. Finding out what that is, who that is, takes him from being a thinly written character into something far more. At the beginning, perhaps, there is a moment when he seems to be slightly obvious in what he is, a sex demon as he is described, possibly more accurately an Incubus, but that fades quickly as his real self comes out and tries to connect with Cordelia. There are two beings with “humanity” in this work, he is one. Cordelia is the other.

Cordelia herself is a bit of a hot mess through most of the story, but over time she grounds herself, learns about who she is, and in doing so that answers a lot of questions she has held for a very long time. It is clear there is something different about her, it is a bit telegraphed at times, but not too badly so. When the truth comes out, when she embraces it, there’s a certain lovely innocence that comes out overtop of who she has been and I really enjoyed that.

The work tells a complete, passionate tale, but it also leaves some questions unanswered, the fate of one character close to Argoth unclear for one, what exactly Cordelia will do with her life now a bit less unclear, but open to interpretation. The ending is satisfying nonetheless and in that I couldn’t help but smile.

I do wish that the story was longer, to allow for, perhaps, a little more happy in the ending, to find that piece of closure that Argoth does not have in the end. The ending tells the story, but it allows for more to be told and I’d really like that to happen. Solid writing, characters with depth, presence, and more. A touch of heat which does not overcome the story itself. All in all a wonderful read and the pleasure that comes with having that.

I’ll give this work five out of five pitchforks.

A wonderful story, fully realized characters and a universe that feels right from the first word to the last. I’d love to see where this story goes from here, there are more than enough hooks in the story to allow that to happen and I hope it does sometime…