A Review of A Byte of Paradise by J.G. Scape

A Review of Lexi and the Devil by Michaela Daphne Taylor 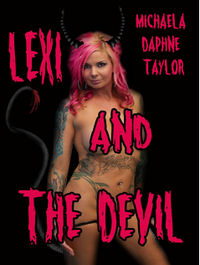 Lexi and the Devil by Michaela Daphne Taylor

I’ve found, on occasion, that some of the works that appear on a search for succubus books have, barely, a connection to the subject. Many times the actual appearance of the succubus is for less than a page, means really nothing, and as a whole, reflects how little story there is for all of the attempt at writing a hot flash.

Then comes the other problem which is that when the main character is dislikable from the first moment, it doesn’t matter if the erotica is there or not, if the story is good or not. Driving a wedge between the reader and the story usually results in disappointment for everyone.

Lexi makes a deal with the devil, but that deal turns out to be very one sided. Having lost, in more than one way, Lexi confronts him, looking to have her revenge. The thing is, the devil is holding all of the cards, and Lexi is playing his tune.

The only appearance of a succubus in this work comes at the very end when the devil makes Lexi an offer, she accepts, and its transformed. Otherwise the work just revolves around Lexi’s attempts at being “evil” getting what she desires and then being sent off to pay at the hands of the devil.

It’s a bit more confusing in that while Lexi is a paper thin character with only one thing on her mind, the devil is actually interesting to a point. There’s more to him than Lexi and that again hurt things because the main character should be central to the story as a whole. The devil, and hell for that matter, are larger, more interesting characters than Lexi.

Lexi being a gold-digger, if one who knows a little bit about supernatural things, just wasn’t a hook for me. She has her big scene at the beginning which clearly tells of her one-track mind and desires, but little else. Even when she’s confronted by the devil, she doesn’t change her attitude or anything else about her.

Really nothing of interest here, though the idea isn’t a bad one. The work needs to be developed more and with that there could be something more to this as well.