A Review of Demon Lust by Snowe Foxx and Panthera 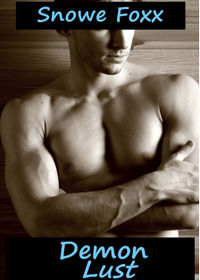 I’m starting the new year of reviews with something of a disappointment in the hope, though it may be fleeting, that there will be better things to come as the year progresses. It’s always disappointing when story is sacrificed for erotica, no matter what form it may take and when it does even the best of twists in the ending can’t really help to make things better regrettably.

Many times the stories about incubi, in whatever forms they may be, tend to focus on one point only. Getting the main character and the incubus together as quickly as possible and then seeing what happens from there. It’s more challenging to draw out the story and make it more before going off the rails.

Priest Daniels is a bored, sacrilegious man of the cloth who is about to come face to face with the most frightening creature known to man: a demon. This is no ordinary demon, however. Demos is a very large, imposing man with incomprehensible powers; powers he employs in his quest for the hapless priest’s soul.

Will Daniels be able to ward off the extraordinarily good-looking demon’s advances and prevail against the Devil’s minion? Or will he succumb to his wile and charm?

Daniels finds a demon is delving for his soul. After a time the struggle ends, the need overcomes and the results are quite unexpected.

This can only be described as a hot flash and really not much more than that. There isn’t a lot of story outside of the interaction between the main characters and the majority of that tends towards constant pushing by Demos, the incubus of the work, until Daniels’ will crumbles and he succumbs. It’s hard to find much story otherwise because, as a whole, there isn’t.

There is a smattering of set up, but beyond that point the story takes on a dream-like quality and as such any character development is left to the side as the erotica heats up and things transpire. It’s a shame really because there is a story to be told, but that doesn’t have the opportunity to come out and it should really.

There is an interesting twist at the end of the work, which consists of three lines of dialog, which I would have loved to see develop more than it is. It’s unclear who, exactly, is speaking save that it is a woman of some description, with the most interesting question that she puts to Daniels. There’s a story in those three lines that, I think, tells a lot more than what this story did. It gives some needed background, a reason for things happening as they did and more.

But that never happens. The story leaves a lot of questions about what happened, what could happen as a result, and more. Perhaps the author would have been better served to continue this work from where it ended and tell the other part of the story.

Certainly, at least for me, it couldn’t have hurt.

Overall the characters are a bit stereotypical, the direction of the story was telegraphed from the beginning and the ending, and is one to ponder mind you, couldn’t get me out of the disinterest that the work had. Erotica alone isn’t a good story. Too much of that here by far.