A Review of Eve Marshall: One For The Horde by Serene Makepeace

A Review of No Angel by Pippa Jay 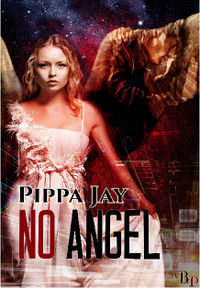 No Angel by Pippa Jay

Sometimes the most interesting thing about a story doesn’t come to the main characters alone. Sometimes to comes to the appearance of one single character who appears for but an instant and then is gone, leaving questions unanswered behind that one would really like to know the answers to.

It is so very difficult to accept when you are forgiven. If you are an Incubus, and your past comes to haunt you, that acceptance comes with a price. The thing of that is, whether you can or not, the other does. So what does that make of you and what comes of you in that moment? What is the price to be paid in forgiveness and can one survive?

How far would you fall for love?

Centuries ago, guardian angel Lucien committed a terrible sin. He gave in to his own desires and revealed himself to the mortal woman he’d been charged to protect. By kissing her, he condemned himself. Torn of his wings and his angelic powers, thrown down into the City Below, Lucien now serves Satan as an incubus who claims souls for his master from the City Above, and who feeds on the energy stolen from his mortal lovers. Dark, sexy, and charming, he’s been top of his league for decades uncounted.

Until His Infernal Highness decides to send Lucien looking for a lost angel. Lucien has no idea what he did to deserve such a punishment, since the touch of an angel could destroy him. Yet the challenge and the potential kudos of seducing one of his former heavenly kin leads him on.

But when he finds the angel, he learns he still has more to lose than his already forsaken soul.

Lucien has been an incubus for a very long time and he still remembers why he is an Incubus,how it happened, and more importantly, who was entwined in his fall. A summons, an order, and now Lucien finds that the angel he dared to love, and payed dearly for, is who he has been sent to find. But is that all there is? Or is there something more beneath the lies and deceit of his world?

The work is set a bit in the future where the world is, and yet isn’t quite what we see today. That is seen but fleetingly, a glimpse of the setting before the story focuses tightly upon Lucien, his world, his past and what he has been told to accomplish. It’s a setting in which, quite simply, anything can happen and in being so the author creates the most amazing scenes of having the main characters having to face their own truths.

Lucien might seem, at first, a bit stereotypically “evil” but this is quickly brushed aside as his past, which is complex and well woven into the story, is told fully. The work gives bits and pieces of his life, his fall, and the reasons within that, but in each moment Lucien’s heart and soul of his character comes through clearly. The same is true of Miranda, the angel whom Lucien is charged with seducing. While her story isn’t quite as well told as Lucien’s, it is very clear that she has a past, holds it close to her, and is focused on one truth within herself.

It is the meeting of both of their truths that makes this story touching, warm, passionate and truly an enjoyable read. But there’s something more that just adds a little something that completes things. Her name is Angelique, and she is a Succubus.

Angelique is possibly the most fascinating character in this work for me. Not for her being a Succubus, not for her mannerisms, actions, or how she presents herself. What I loved about her was simply that in a very short appearance, she revealed and yet didn’t reveal her own truth. She has that character trait that I do love in Succubi most of all. She’s more than she appears to be, but to find out why, that’s something you have to work for. Lucien doesn’t quite manage that, only brushing the surface of who she is before Angelique straightens him out and sends him on his way.

I wish there had been more of Angelique in the story, sadly there isn’t, but she’s a force in this work, one that reveals things about Lucien, before disappearing once more. There’s a story in her, and that’s something I’d like to know more of. Sometimes the ones that tell of love are those who know of it in all its forms.

Strongly written, there is not a wasted word, action, event or moment to be seen. The characters are fully told, and in being so the work is amazing. This is not a work of erotica to be clear, it is a story of finding oneself and finding a truth not believed. In being so, the passions that are shown are more real, more haunting and more persistent than any simple erotica could be.

I’ll give this work four of out five pitchforks.

A wonderful work, the characters with their stories, personalities, histories and fates revealed. Save for one Succubus named Angelique. A story untold, but with every bit as much mystery held within for who she is. A story that, one hopes, might be told sometime…