A Review of No Angel by Pippa Jay

A Review of Eve Marshall: One For The Horde by Serene Makepeace 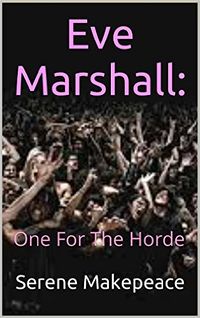 Eve Marshall: One For The Horde by Serene Makepeace

A short while ago I reviewed the first work in the series Eve Marshall by Serene Makepeace. and you can find that review here on the Tale. At the time I noted there was a lot of questions left unanswered, that the main character’s past and that of her missing sister weren’t delved into much as well. I hoped that in the next work there would be some time spent on telling that story, of finding out why things are and who everyone is.

However, that didn’t come in the second work. What makes things a bit harder to take is that there is a real need for the author to proofread and edit their stories, for one, and for the other, a story that only talks about the main character having sex with various supernatural beings becomes a little repetitive quite quickly. Especially if those encounters end in exactly the same way every time.

Continuing to fight the good fight, Eve Marshall ventures onwards towards McNelias and her sister. In this installment the succubus has two more steamy encounters with creatures of the night that can only end one way.

Eve continues on her path to answers, but along the way finds herself having to deal with things unexpected and questions unresolved.

As much as the book summary seems to say the overall story progresses in this work, I don’t feel like it does, if at all. The work encompasses two separate events for Eve, one with a gargoyle, the other with zombies. Of the two, I thought the first was better mainly because it was a little different, a bit more time spent on seeing some of Eve’s thoughts. The latter event really doesn’t do anything to drive the series onwards, save for a single line of commentary by Eve at the end.

The focus in this work is the erotica, again the first encounter being the better for the setting, what Eve does, and what happens along the way. The second one just seems like an afterthought, a little bit more written when the first story didn’t quite have enough length to it.

Considering what the main plot of the series seems to be, that of Eve finding her sister, I think there needed to be some time spent in talking about her, perhaps telling of that past, why Eve is doing what she is. There is only a fleeting reference to that issue and then the story turns back to the erotica once more. The erotica itself is somewhat lukewarm, especially the latter story in the work, and it’s a shame really. There was an opportunity to expand on the first story in some really interesting ways, but it didn’t, instead getting away from the story and to the sex as quickly as possible.

One thing that keeps bothering me is that anyone that Eve becomes intimate with has a bad end. It’s becoming a trope for her, there seems to be no other way things can go and that has to do something to her. Whether it does, or not, that’s not explored either and it really should be. I’d like to know what Eve’s thoughts are and how it effects her.

There are a lot of editing mistakes in this work. There are problems with tense, spelling, and so on. There needs to be at least one more editing pass for the sake of making this read better, but that’s just the start. There needs to be some focus on the core plot as well, there needs to be some movement in the series arc. There isn’t here, it’s just a couple of vignettes. Telling more story would be nice to see, because there is one to be told.

The work needs another editing pass, there needs to be more story than just telling of the setting and then rushing into a sex scene. There’s a story here, it’s lurking underneath the erotica, but it’s not finding a way out. Doing so really would help a lot as would changing up what happens to Eve all of the time when she’s being intimate with whomever she’s with.