A Review of Claimed by a Succubus by Naomi Silvera

The model’s expression says everything about this costume

A Review of Tale of the Farm by R.K.B. Kirin and K. Bell 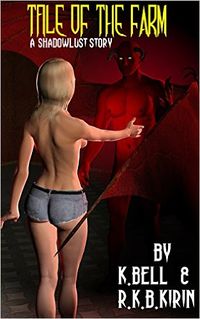 Tale of the Farm by R.K.B. Kirin and K. Bell

A little while ago I reviewed Tales from the House by R.K.B. Kirin and you can find that review here on the Tale. I rather enjoyed the story and the succubus Selina who was the core of the work was I thought a wonderful character. I had wondered about the possibility of future works, or a series, and quite recently the author published a second work in the series which I will be receiving today. I do think that the title of the series, Shadowlust, is an excellent choice and I hoped that the second work would be as wonderful as the first.

Caroline is a fan of horror films who finds herself lost on the road and forced to look for help on a dark, creepy farm. The next thing Caroline knows, she is thrown into a shocking, shadowy world more frightening than any movie. She encounters an well-endowed incubus who clearly wants to get know her much more intimately, while a beautiful, ghostly woman and her disarming consort appear claiming they want to help her. But there is a secret that Caroline must learn. One that will change her entire life.

Will Caroline become trapped in a nightmare she cannot escape? Or will she find herself in a sensual dream she never wants to leave?

Caroline finds herself stranded on a farm and has no idea how she got there exactly. An encounter with an Incubus leaves her both frightened and aroused, but at the same time confused. The truth is stranger than fiction, but the reality isn’t. When the answers come, then everything is made clear by an odd couple Caroline encounters, the Incubus that pursues her, and her own desires revealed.

The work is every bit as good as the first work in the series. The characters, and there are a lot more in this work than in the first, speak with their own voices, but Caroline is the centre of the story and everything revolves around her for the most part. There is a secondary storyline which centres on a couple that Caroline comes across in the midst of a rather intimate moment that I enjoyed.

Through this second couple, there’s a fascinating explanation of how things work, why Caroline is where she has come to, and what, as a whole, it all means. Much of that reinforces the prior work in which Selena, the succubus, and I tend to think of as, Mistress of this domain, explained how things worked. I found Wyneleth, who is the supernatural part of this new couple, a complete joy in the story for how she presents herself, her character and how she holds her opinions and thoughts so well. She seems a bit of a foil to Selena, in a way, and where that leads to I think will be interesting to see.

The incubus of this work, Sebastian, is a mystery through most of the story and when his secret is revealed I liked how it fit into what had happened in the work to that point, what Caroline’s reaction was, and where the story went from there. It made sense, it explained a lot of why things happened, but left a few questions loose to be picked up towards the end of the work by other characters as need be.

The balance between story and erotica was well done, there is good heat in the several hot flashes that creep in here and there. There are one or two points where things go a little over the top, but not too much so. Some of the reactions from the other characters as Caroline and Sebastian have their fun are amazingly funny and I adored that part of the story.

The characters are written very well, having a clear voice, the scenes are rich with descriptions, thoughts, and how everything links together is well done. There are a few, very minor spelling and word mistakes, but they are very minor as a whole, and do not take much away, but they are a little stumbles in what otherwise is a strongly told story.

With all that comes in this work, what it describes and lays out, I do look forwards to the next work in the series. Selena’s fleeting appearance adds a nice connection to the prior work, but it also tells of what the future holds. How that works out, where it does, I think can make for many delicious stories to tell.

I think this work is a wonderful followup, it tells a captivating story, but more so, it explains more about this universe, how things work, and why they do so. It feels like more of a complete world, the characters dwelling there with their own lives and stories to tell. I do hope that Selena and her realities do appear again for there are so many more stories to tell.