A Review of Incubus by Aiden Darke

A Review of Love Bites by James Newman and Donn Gash 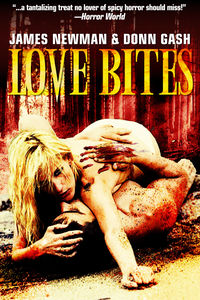 The myth of Succubi and Incubi can, of course, be told in many different ways. There are some ways that are more thoughtful, some more sexual, and some that sort of are missing the point here and there.

Then there are the stories that tell you, right from the cover, that what awaits is something that’s more focused on horror than it is on erotica. In those cases you hope that the characters are interesting and the succubus and/or incubus has something to hold your interest. Sadly, this work didn’t have that for me.

Interested? Give us a call. There’s nothing to be afraid of.

Jerry’s home life has gotten stale and he’s looking for a way to change things. Joining a website he comes into contact with a couple that like him and he likes them. After meeting them, Jerry convinces his wife to come along and meet his new found friends, for the first and last time.

The work is, first and foremost, a slow build towards the climax which is a horror story. There’s a lot of questions one asks themselves about Les and Wanda, but just as many about Jerry and why he does things. There’s a certain disconnect, a kind of dysfunctional personality in Jerry fro the first page. His life, what he thinks of it and how he is looking to change it, reads very much like a couple that just can’t communicate.

As such, it’s hard to care about Jerry, his wife, or really anything about them. In a way the same things can be said about Les and Wanda in that they have really few redeeming qualities. There is the slightest hint that Wanda is better than she seems to be, but really it’s not enough by itself to do much for me.

When it is revealed what Les and Wanda are capable of, there’s a very slight hint that they are, in a small way, possessing the succubus and incubus ability of attracting their prey through sex, but it’s fleeting before the horror aspects come out fully and all is revealed. In that moment, when I should have cared about Jerry and his wife… I couldn’t. That is the problem here for me at least. I need to care about the characters and I just didn’t.

It’s a shame because the work is written well, tells a good, strong horror story, but at the most important point, the characters, they just aren’t interesting. For those looking for a suspense leading towards horror, the work does that well. But I just didn’t care I’m sorry to say and I really wanted to.

I didn’t care for the characters, the story, nor the outcome. There wasn’t anything that really hooked me in the story and the connection with succubi or incubi is so vague that it might well be a mirage. For those that like horror stories, it’s a well told one overall. For myself, and my tastes, it just really isn’t.