A Review of Love Bites by James Newman and Donn Gash

A Review of Incubus by Aiden Darke 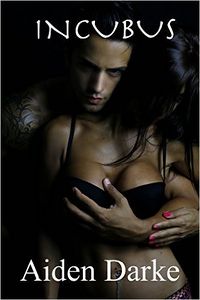 There are some works that have characters that are interesting, have a past, and of course, their own secrets. It’s interesting to read and discover what they are, why they are, and, in the end, what drives them as characters in the story. But in doing so, the story cannot rush from moment to moment, event to event, and not allow some kind of resolution to develop.

Taking care to tell a story, no matter how wonderful the erotica is, matters. It comes in the words, the characters, and, in the end, the editing. If that cannot all come together, then the work isn’t all is should have been. Which is why I cannot understand a book with flaws in it can have a five star rating when it has enough issues to not make that really true.

Carrie leaves her career in academia when she falls under the spell of the mysterious Marcus. Soon she discovers he is an Incubus, a sex demon. But Marcus has his own problems when a Succubus, a female of his kind, moves into his territory. Marcus must draw on all Carrie’s energy and sexuality to save himself and the entire city.

Carrie encounters Marcus who enthrals her and draws her into his word. There are passions, needs, wants and desires to fulfill. But there are also questions, dangers and a voice from the past that brings terror. The discovery of what Carrie wasn’t aware of before leads to a choice, not only for her, but all around her as well.

Marcus is the Incubus of the work, and the story mainly revolves around him, his world, and how he draws Carrie into it. While that part of the story works well, there is some lovely heat in the story telling, there is some well done mind control aspects that I think worked, the story moved at breakneck speed for the most part, leaving really little or no time to understand what was happening to Carrie, or what Marcus wanted from her exactly. He isn’t a stereotypical incubus, thankfully, but at the same time there was, as a whole, a disconnection between himself and the events around him. At least until Kara came into the story.

Kara, the Succubus of the work is, sadly, extremely stereotypical in her actions, attitude, and personality. There really wan’t must to like about her, save for some of the moments when her powers were used. There was actually more heat in those scenes at times than there was with Marcus, if for only the reason that while she didn’t really care about humanity, she at least had more of a physical and emotional connection at times. Even if that turned into something cold and harsh in the end.

Eventually there is a conflict between Kara and Marcus which offered a lot of hints and questions, but didn’t follow through on them. Besides their connection, which I was surprised at, there came a comment about the last time they met and what happened then. Knowing that, the two still confronted each other and in doing so the story became confused in where they were, what was happening. I didn’t see the point of the shift, nor why it would matter at all, all things considered. Again, the scene was rushed and while that did fit the situation, as events unfolded, more and more questions came that didn’t have a resolution.

The work does have a good balance between the erotica and the story, but the speed at which some of the scenes came and went didn’t leave a lot of time for characters to develop or tell their stories and that’s a shame because so many other characters appear with stories to tell and they are limited to a few short comments, or actions, before the story moved onwards.

The work needs another editing pass to slow the story somewhat. Allow the characters to tell, think, express what is happening, then continue on. Allowing the story to catch its breath before rushing to the next climax would have, I think, made for a better read. Beyond this, the author has a few points where a choice of word was incorrect. There is also one point where Marcus is called Maximus, which seems to be an error. But the most frustrating mistake comes in the last pages of the work when Marcus tells a character to leave, a female character, and she is described as a he. It took away what otherwise had tension and meaning, leaving me confused for a moment and I shouldn’t have been.

The way the work ends suggests that there is to be another work to come and if there is, then I hope the author will take some time to tell Marcus’ story, but Kara’s as well. There’s something important there needing to be told. Passing over that for the sake of the current moment I think would not do justice to the characters, their past, or who they are.

I felt like the story was too rushed at times and being so there came some moments of confusion which brought me out of the story on occasion. There were also some moments when statements and actions didn’t connect well. Kara being so sadly stereotypical in her nature was a disappointment, Marcus being a cypher throughout the work and not really telling his story was a shame as well. So many questions unanswered and when the ending arrived, it was far too short, confused, and left me wanting.

The heat is very good, the hints of mind control through Marcus and Kara are really well done. But there’s a lot of confusion in the story, some scenes don’t make a lot of sense. Most of all, the work needs another editing pass, to slow down the events a bit, and to correct the mistakes. Given all that, if there is a part two, I will read it and see if the questions are explained as they need to be.