A Review of Incubus: A New Adult Paranormal Romance by Alexis Darlington

Devil Costumes don’t get much worse than this…

A Review of Succubus Week: Thursday by Lisbet Laire 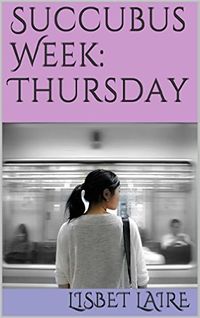 There comes a point in a series where things seem to be almost rote in how they transpire. It is a very hard thing to overcome, it can cause a story to seem like it has been told, in some form, once before. That said, there can be a single moment in a work which finally offers the promise that, yes, a question that has been hanging over the entire series might be answered. Even if that won’t happen for some time as yet.

It’s been a long day for Adrienne, a centuries old succubus. The hunt for a murderer using their paranormal powers to kill humans has been a drain on both her patience and her powers. Forced to spend hours on the train to try and hunt out the killer she is desperate to find some way to vent her frustrations. Going to the gym seems like an ideal plan, work out a little on the treadmills, get some muscle tone on the weights, be seduced by someone in the sauna. They’re all good ways to reduce your stress.

Adrienne gets to work staking out the scene of a crime and finds that doing so is as boring as watching paint dry. At the end of the day, she decides to go and exercise which brings her to encounter a lovely lass who promises to work her up.

The thing about this work is that there’s a certain feeling of deja vu that happens to Adrienne, what she does during her day, and, eventually, the erotica that comes into play in the latter half of the work. It feels very much like a boring, repetitive day where nothing happens of note, time passes slowly and nothing comes to fruition. Now, much of that is simply from the events that happen around Adrienne, which make perfect sense all things considered.

One of the things that the series has been good at is starting to describe the supernatural world that Adrienne lives in, the place she works at, and what her like is like. But the detail in that hasn’t really gone anywhere, remaining somewhat vague at times. There are hints about things, the idea of a greater world to explore, but the work doesn’t sink into that, remaining close to Adrienne. There are a few moments when it is explored, slightly more, but it only serves to offer more questions and not a lot in the way of answers.

As for the erotica, there’s a certain familiarity in how that comes about in the work, what Adrienne does, and were things wind up. It feels a little formulaic in that the heat, the expressions of lust, the needs that both Adrienne and her lover have, all feel like the series has been down this path before.

Being that Adrienne is a succubus, it would be nice to see her be a little bit different in her approach, her actions, even, if only a bit, how she expresses herself. There’s a hint of that when Adrienne first encounters her partner in the gym, told in her voice, and I really wanted to see more of that because it was different and interesting.

The core plot of the series, the mystery, moves slightly, but it isn’t resolved, nor did I expect it to. What I didn’t expect was the return of a thread that was mentioned, forgotten, commented on, and then lost. This work lays out, quite clearly, that come Saturday, Adrienne will be seeing her mother and I personally cannot wait for that to unfold.

As much as the series has talked about Adrienne’s world of work, it really hasn’t talked about who she is, what her past is, and why she has made the choices that she has. It is, at least to me, vital that this be explored and giving an indication that this will, finally, happen, gives me some hope that the following works in the series will do so.

While the writing is as well done as ever, and the work tells of a thought out and fleshed out plot, there seemed to be a bit of something lost in this work compared to the others in the series. No amount of heat in a hot flash can really overcome a story that has been sleepwalking to get to that point.

This work felt, at least in the erotica, as if it has happened before in the series. Perhaps that needs to be spiced up a bit, changed slightly, something.

Still, the promise that Adrienne will go to see her mother on Saturday does make me smile, and that, more than anything else, is what I look forwards to in the series. Because it will, at last, really explore who Adrienne is and not what she is.