Holly and Ivy By TeraS

A Review of Succubus Week: Thursday by Lisbet Laire

A Review of Incubus: A New Adult Paranormal Romance by Alexis Darlington 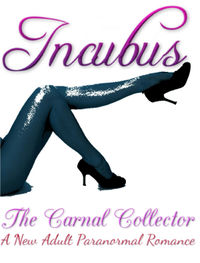 A review this time of a work that appears in a rather long series of works. It has an incubus as one of the characters, which is a good start, but it is what has been called here many times a pamphlet in length and as such it’s disappointing.

The blonde heroine finds herself worshiping the creature she set out into the caves to find, the incubus. She throws herself into full submission to his every whim, desire, need, and pleasure. All thoughts of previous experiences are removed from her mind as there is nothing but him, her submission to him, and his ownership of her very soul.

A woman finds herself at the mercy of an incubus who does whatever he wants to her, then walks away after she surrenders all she is to him.

Possibly the shortest and weakest hot flash that I have read in quite some time. There’s no character development, no story, nothing save a few pages of well over the top sex followed by a series of repetitive questions asked by the incubus before he just walks away from her and the story ends.

It’s a good example of the book blurb being a lot better than the actual story in fact. If one didn’t pay attention to the length of this work, you might expect an interesting story with a little depth to it. What happens however is that the work is one very short encounter and it isn’t all that erotic at all. After reading this, I really don’t think much of the series if this is a good indication of what the rest of the series is like. If nothing else at least this was something I read on Kindle Unlimited and didn’t pay for it because if I did I would be really quite upset that I had.

The characters are not named, the incubus is called “He” in a D/s relationship sort of way which I didn’t care much for either. How the scene was written I feel like the author doesn’t really understand the concept of a healthy D/s relationship, and yes I know this is a fantasy work but still some grounding in good practise would have been a pleasant surprise. The writing was rushed, the story flew by faster than it being a mere five pages would have indicated really. It actually crossed my mind as I was reading if the author had written this as a challenge to write a piece of erotica in under a half-hour.

A very thin story, characters that had nothing to them, erotica with no heat in it. All in all this was a disappointment and it didn’t need to be so. Edit the work, add some length to it, make the characters better and make the hot flash really hot. Of course what that means is adding about 30 pages on top of this and completely rewriting things.

Really nothing to look at, terribly disappointing and that’s a shame. The author gets one pitchfork for creating the work, but otherwise… there’s nothing here.