A Review of The Devil You Know by Richard Levesque

A Review of The Hipster and the Succubus: Volume One: The New Host by Christine K. Lahti 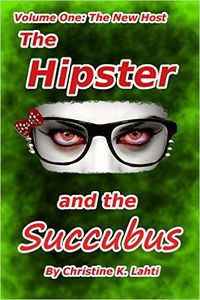 The Hipster and the Succubus: Volume One: The New Host by Christine K. Lahti

A review of what I hope, given how much fun I found the first work to be, of a Succubus series that appeared this past October. It recently was released on Amazon as well and this I hope is a sign that another work in the series is forthcoming.

Myths and legends are exactly that. They tell of a story which, depending on the teller, can be brought to be more, or less, than how things were. Encountering such a legend, coming to know them, can be a shattering experience… For both souls.

Barista Kelly Larkson was just trying to live her life, working a low wage job and going to school to get a degree in Liberal Arts when a small accident caught the eye of Lilith, a Succubus visiting our world. Willing or not, Lilith was going to use Kelly’s body to fulfill her needs. Awakening more carnal desires in Kelly, the two are destined to become friends or foes.

Kelly just really wants to paint and to be herself, but when Lilith returns to the Earth, Kelly finds that she has a new voice in her mind, one that she can’t ignore. Her life begins to change, Lilith offering her choices that Kelly never had before, the most important one being that she can be more than she ever imagined.

One minor criticism I’ll get out of the way and that is the title is very long and unwieldy. Really I think it could well have been shortened to The Hipster and the Succubus: The New Host and it would be so much better looking. It is a minor quibble I admit, but it did bother me.

Lilith in this work is never shown in a physical form, being a thought, an expression, an entity. In spite of this, not seeing her I think made her a stronger character in that her bemusement, the expressions of wonder and questioning, made her words carry more weight. Her personality alone had to carry her throughout the work and I felt that the author managed really well is having that unfold in a way that meshed in the best way.

Kelly is an interesting personality as well, being a cute mix of innocence, need, want and, when she is pushed a little by Lilith, desire. Following her through the work, trying to come to terms with Lilith, then to be shown what might be possible if she wishes, is amazing. The interplay between Kelly and Lilith seems very much like two sisters arguing at times, but then there comes a point where things take a bit of a turn.

Lilith is a slightly ambiguous personality as the story progresses, but she makes a specific claim to Kelly and it is one that I personally rather liked. More than anything else it said that this Lilith wasn’t going to be stereotypical. But at the same time, reading Lilith’s thoughts here and there, her true intents are a bit in shadow. Part of that is simply how Lilith sees the world and the reason she is there. Against this however comes Kelly’s needs and thoughts which create a bond between the two of them. It is this, as it develops over time, that I loved the most.

There is a short hot flash of erotica in this work in which there is some lovely Succubus mind control that I quite enjoyed. The scene isn’t out of place, or odd, but rather makes perfect sense in the moment and it gave both Kelly and Lilith what they both desired in that moment. There is a scene in the aftermath that I wonder about possible future ramifications, simply from a comment that Lilith made, but that will have to wait for another work in the series to tell.

I would love to see Lilith’s thoughts of her past more, perhaps a moment where Kelly gives way to her for a time. There’s a interesting subtext of the two personalities, how they each see things, and what might happen to that.

Well written, the characters are fun, thoughtful, and have voices that are as strong as their personalities. I think the beginning of the work was weak, going off in a tangent that, at least for me, didn’t have much in the way of meaning, even if it was rather funny about who was involved in the moment. The ending is a bit abrupt, but points directly towards future stories which, as I have said, I would like to see.

A bit silly at times, but that is overcome by Lilith’s personality and Kelly trying to come to terms with her new reality. I’m hoping, as it seems to be, that this Lilith is all that she has told Kelly she is and there isn’t another shoe waiting to be dropped. Seeing how the two of them get along and make their way will be an amazingly fun read I expect. I do hope that this happens for all of the promise that I see.