A Review of The Hipster and the Succubus: Volume One: The New Host by Christine K. Lahti

Holly and Ivy By TeraS

A Review of The Devil You Know by Richard Levesque 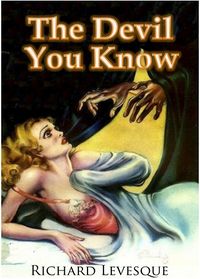 The Devil You Know by Richard Levesque

I have always found that the hardest thing to write is a story that is set in the past. Some eras are better known that others of course, but it is still a challenge to get the tone, the words, the moments right. It’s more complicated when you mix in a supernatural theme and then things tend to get a lot more interesting.

1946: The war may be over, but in Hollywood all hell is breaking loose.

When Marie Doyle discovers that demons are seducing the young women of Hollywood, she doesn’t know where to turn for help. But when a demon takes the soul of her best friend, Marie has no choice but to stop them herself.

The devil you know may be better than the devil you don’t, but for Marie Doyle the choice might not matter. With demons on the loose and no one else aware of the truth, her only option is to send them back to hell—even if it means risking her soul.

Marie never expected that her life would go from housewife to having to battle incubi to save her world. The battle is long, dangerous and many will fall, but in all of the lies, deceit and terror that surrounds her, Marie also finds that sometimes faith manages.

The work describes a rather drunken mistake made by a group of drunks that happens to release into the world an incubus who then goes about drawing more of his kind to Earth. As this progresses, the incubi have their way with various men and women, threatening many lives and some sort of plan unfolds.

Against this, the heroine of the work, Marie, finds herself having to see her friend taken along with others and, eventually with some help, faces off against them in an attempt to stop them. It’s the telling of this story, of Marie discovering what has been going on that makes up the core of the story. While there is a certain amount of erotica, a smidgen of mind control as well, they serve mainly to pull the story along, driving things towards the conclusion.

The supporting characters, both good and bad or indifferent, or unknowing, are strongly written, having good clear voices in the work and providing for many side stories and layers of events to unfold. Some are captured in the events, some taken by them, but for all they are transformed to one extent or another by what happens. Watching the changes unfold in each character and what happens as a result tells quite a lot about each of them, and in some cases what their fates are becomes quite a surprise at the climax of the story.

The work does focus on the actions of the incubi, but there is a fleeting glimpse of a succubus as well. For the most part, and what is slightly disappointing, the incubi are expectantly evil in their actions and personalities while the succubus isn’t really move than a fleeting glimpse. It’s not quite clear if she is like them or if there is something more about her. In the case of the incubi, they use their powers to control others, bend their wills, and cause them to do some really horrid things. It’s also, in a sort of expected way, that the incubi take many, many liberties with the women around them. That’s a little repetitive at some points which didn’t need to be I think.

Regardless of this, the writing is solid, and the world created fits nicely into the era it is set in, there’s no out of place dialog or modern references made. It feels and read correct in the time and place, including the social society, the attitudes of the rich and the realities of those that are not. Marie’s character is, by far, the strongest of all, which it must be to carry the story, but it’s more than that. There’s an internal struggle in her as the story unfolds and at several points her monologuing is quite striking.

The work ends in a way which makes this complete, though there is a little hint that leaves a door open for the story to branch off away from the events here and continue. It’s more of a question unanswered really, but an important one.

An enjoyable read, if a bit long at times to go from one event to the next. There were a couple of points where it felt like there was some unneeded passages in the work, though this only happened a handful of times. The author managed to keep a rather shocking surprise well hidden until the climax of the story and in doing so I was surprised by the turn of events as much as Marie was.

It really is a very good read with quite a number of twists and turns that I didn’t expect which made for a good, solid, gripping read. I will freely admit that at some points in the work there were points that took away from my enjoyment, but they were few and far between. Quite the interesting supernatural thriller with characters that held my attention. I just wish there had been a little less convoluted plot at times which seemed to slow things down a bit too much.