A Review of A Succubus Stole My Girl! by Haleigh Cookson Clark

A Review of the Caitlin Faire Series by Skye Malone 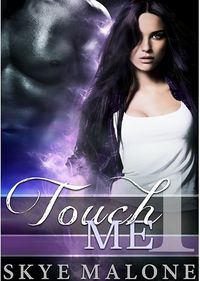 Touch Me by Skye Malone

Earlier this year a new series started called the Caitlin Faire Series by Skye Malone. It’s been a little over six months since the second work appeared, but nothing has appeared since that time. I thought the series was interesting in its own right and so I’ll be reviewing the two works in the series so far with the hope that further works will appear soon.

There are those moments in one’s life when a door is opened and another is slammed shut in front of you. To find out who you are doesn’t mean as much as what you are can be devastating. It is far worse when everyone around you seems to have all of the answers you need, but they assume you know them already. Knowledge is power, but as well it is the weapon that strikes out of the blue.

Caitlin Faire was only expecting a simple night out to celebrate her best friend’s twenty-first birthday. But enter one gorgeous and mysterious guy, and inexplicable visions that can’t possibly be real, and you have an evening that becomes anything but simple.

Until she almost kills the first man she touches.

Caitlin is your ordinary average girl that no one really notices. Her roommate gets all the guys, Caitlin is just as happy to be wrapped up in a book, all things considered. Things change suddenly when the world starts to look a little different, and those she encounters tell her that she knows why things are as they are. Caitlin is confused, torn, and lost, but when things take a turn for the weird, that’s when Caitlin’s story begins.

Caitlin isn’t what you would describe as a typical succubus in that she isn’t “sexual” or “stunning” in how she appears. She is however true to herself, she knows exactly what is important and regardless of anything else, she does hold onto that part of herself. There are hints, especially from her roommate, that Caitlin can be beautiful, if she wants to be, but the thing is that Caitlin doesn’t.

That makes her interesting as a succubus through the series. In the beginning she has no idea that she is a succubus and that becomes an ongoing theme throughout the first work. Caitlin encounters so many other people that just look at her and warn her about various things, but when she replies that she has no idea what they are talking about, they just laugh, or smirk, and walk away. The first time it was ominous, but the more it happened the more it started to seem like a bit of a trope. Part of that comes from the disbelief that Caitlin has no idea that she is a succubus and it takes a while before there’s a turn away from this thread towards some kind of understanding.

That comes from the incubus in the series, Amar. It’s a bit difficult to like him, or understand where he is coming from at times because he tends to keep his emotions in check, his thoughts to himself and doesn’t really give a lot of information about anything. He looks for trust from Caitlin, but then doesn’t really give a reason to most of the time. Still, he’s interesting in a brooding-mysterious way and that should be something to watch change through being in contact with Caitlin.

What follows from this is, for Caitlin, a lot of self-recrimination, doubt, and second-guessing. She’s trying to figure out what’s going on and why, but at the same times she’s being dragged through events with no control over them. In a lot of ways that reflects Caitlin herself, not quite being in control, but wanting to be somehow.

There is a nice touch of mystery in the plot, the slow unraveling of what is going on around Caitlin that I think works well. Mixed into that is Caitlin’s need to protect her friend when she comes to realize that there are things around her that aren’t normal, are dangerous, and she’s caught in the middle of them.

There’s really not much erotica in this work, which makes sense as Caitlin herself isn’t a sexual creature by any means in this part of the series. But in many ways, that feels like her own internal monologue and how she sees herself. Sometimes being pushed to see what is around you makes you a stronger person and I think Caitlin’s that sort of a character.

With all of the buildup, the first work ends in a cliffhanger which is a little bit contrived, but sets up the second work in the series well. That said, there are questions left behind about many of the characters and over the course of the series I expect those arcs to take up a lot of the storytelling because none of their stories will be simple ones to tell.

Well written, I liked Caitlin very much for her quirks and personality. Amar is somewhat unlikable in the beginning, a bit aloof, but there is room to make him a better character. There’s a lot of mystery to explain, almost all of which is centred on Caitlin herself. But the sort of threats that keep appearing need to be changed up a bit if for no other reason than to make things a little different in that respect.

A good start to the series, but the almost constant encounters and looks that Caitlin gets, that she “knows” becomes really too repetitive over time. While that sets up what is to follow, and all of the complications that come with that, there’s a point when the danger becomes “normal” and it needn’t be. 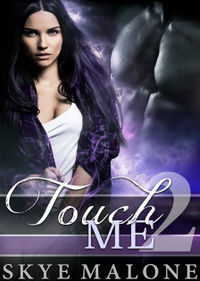 Touch Me 2 by Skye Malone

There comes a time when answers need to be found. The problem is when you are given the answers, but you cannot manage to grasp them and what they mean. When one’s own self cannot see the way to accepting what one needs over what one feels, that’s when things start to go very wrong.

Caitlin never expected to find out that demons were real, let alone that she’s actually one of them. Learning that she is a succubus would have been the biggest shock of her life, if not for the suit-clad men who just forced her into their car at gunpoint.

Who are these people? How are they connected to the guy who just threatened her best friend?

And why is gorgeous, sexy Amar waiting at their destination?

Caitlin is drawn deeper into a world she never knew and in being so, that world sees her truths as being lies. There are threats waiting, but as well there is some hope, if only the ones that might be offering that hope manage to overcome themselves and accept, even if only in the smallest of ways, that there is such a thing as a Succubus that isn’t what they expect her to be.

Following on immediately after the cliffhanger in the previous work, Caitlin’s life becomes more and more complicated as she starts to learn about things that she never knew and never expected. It is a bit rote in the telling as, in the first work, there are so many characters that she encounters that expect her to understand everything and when she doesn’t they cannot see that. There is one single character that seems to, but as a whole that isn’t exactly something that seems to be real.

That said, even with Caitlin’s eyes being opened to her being a succubus, the path towards understanding runs through characters that just seem to have an air of suspicion and disbelief that is contagious. The lack of honestly, of trust, that simmers through the supernatural beings that she encounters, becomes a bit overused and while it makes sense in the setting, I think when that part of the story is muted for other plots that makes for a better story to read.

At one point Amar takes Caitlin to see Bianca, the first succubus other than Caitlin that is quite obviously one. Bianca is, overall, quite unlikable, really her personality is grating from the moment she appears and it reflects that simmering distrust that invades so many characters in this work. There’s a point when Caitlin needs a friend, one that understands, and it doesn’t come in this work.

Still, the relationship between Caitlin, Amar and to an extent, Bianca, is interesting in how it is very much like how water and oil don’t mix together. That thread I think will be something amazing going forwards and I think, somehow, that Caitlin being there will change things for the better.

The characters and writing are as good as the prior work in the series, the work ends on a cliffhanger, which is, to be honest, something I expected to see well before it unfolded. I liked that some of Caitlin’s past was told in her family, as unlikeable as most of them were. But as for pushing the story forwards, it really didn’t as a whole. It took a few strides, made a few points, but then came to a halt.

I feel like the series has promise and I want to see that. But things are getting too wrapped up in the moments and not telling the arcs. Perhaps moving onto why Caitlin is different and telling that story in the next work in the series would be a nice thing to see. The cliffhanger I think can wait a bit for the sake of Caitlin getting some understanding, a reality check at least. It has been offered, but not played through and I think that should come next.

Another cliffhanger, more questions, and more confusion. At some point it would be nice for Caitlin’s truths to be accepted and for her story to move from trying to understand everything around her to the story of who Caitlin is and what her past means.

The series needs to continue, I hope it does, because there’s a lot of good in Caitlin, the promise in her I’d like to see develop. Sometimes one person can make a difference. Caitlin is that succubus I think.