A Review of Eve Marshall: Succubus by Serene Makepeace

Naughty Thoughts for a Naughty Costume…

A Review of the Demon Trilogy by Dean Chills 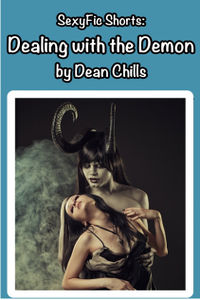 Dealing with the Demon by Dean Chills

A short Incubus series for review this time on the Tale. It is both short in books, there are only three, and short on length, each work is less than 20 pages in length. The series is called the Demon Trilogy and it’s one of the rare instances when a series has a clear beginning, middle and end.

Sometimes the question is asked: What do you need? The more important question is: What are you willing to do? Both questions matter in their own way and both can make their own pleasures and fears come true.

When Elizabeth bought her sister a decorative box at a garage sale, she had no idea that it contained a secret. When she accidentally summons a pleasure demon, she’s surprised that he doesn’t scare her. Then he really turns on the charm and things get completely out of control.

Elizabeth comes into possession of a means to summon a demon, more specifically an Incubus. Not quite understanding what power she holds, she does so and then finds herself smitten by Abel and he with her.

Most of the work revolves around Elizabeth speaking about her past, her family, where she works, and the utter lack of having any kind of “real” relationship. All of this takes up more than three-quarters of this work before she finally comes into contact with Abel in, what she thinks, is a dream.

Abel’s most interesting feature isn’t physical, though he has horns and some obvious incubus features. He even admits, quite clearly, that he is an incubus, though Elizabeth seems not to understand what that means. When he does appear, there is a hint that he has been trapped somewhere for some time and Elizabeth frees him. It’s not clear if that matters here in the first work in any clear way however.

There is a slight D/s theme that occurs as the erotica begins, Elizabeth becoming submissive towards Abel’s words and actions. The running commentary she makes about smells, touch, and taste are cute, sometimes funny, and very descriptive, which I did like. There is a clear change in Elizabeth’s personality the more she is in contact with Abel, but whether that is a kind of mind control or simply that she is smitten by him isn’t clear.

There is a clear warning given by Abel which seems to set out why the series is but three books in length and the questions that are left, mainly over what happens next, what has Elizabeth gotten herself into, and most of all, is Abel as unique as I hope he is? The next work will tell.

Too much time spent on minutia in the beginning of the work, which I think hurt things as a whole. I didn’t really see the point of talking about tangential subjects and eating up pages doing so when the point of the story could have been gotten to sooner. 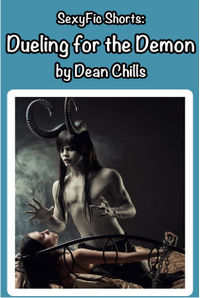 Dueling for the Demon by Dean Chills

The second work in the series brings some conflict into Abel and Elizabeth’s lives, but it also answers a few important questions.

When you find someone and then are threatened with them being taken from you, there are choices to be made. Can you find the strength within yourself to overcome and keep that which you believe it yours, or are you fated to play someone else’s game?

On Elizabeth’s second night with the Demon, Abel needs her help. She must battle the small but powerful witch who wants to destroy him. The battle goes poorly for Elizabeth until Abel is forced to intervene with the only power he has… that of pleasure and delight.

Elizabeth believes that her encounter with Abel was all a dream. He couldn’t be real, there was no proof and so she sets out to dream about him again. This night however, things do not go quite as she expected, and in the end Elizabeth has to fight for her life, her sense of self, and to find out just what reality really is for her.

The second work in the series is something of a mix between an action-adventure, a lesbian love scene, if forced to be so, and, again, Abel being dominant over Elizabeth. As in the first work, there is a lot of build up and world building that I did like before the story dropped into one sex scene that really wasn’t all that much so and another that also didn’t have the heat that was in the first work.

There was a disconnect I felt in the story, that things were rushed quite a lot in this work and I think that hurt things overall. There could have been one single fight scene, there were several, and that might have been too much. There’s clearly some mind control being used by Abel in this work, but it comes across as rather heavy-handed and I didn’t find that to be interesting or reflective on Abel’s character, at least what has been told about him to this point in the story.

At the end of the work, Elizabeth discovers something left behind by Abel to convince her that he is real, and all she experienced was real too. But there’s one thing not mentioned which should have made things clear. Elizabeth injures herself in several ways in the fights and she should have felt some of the effects in some way. At least in that happening there would be more impact than the thing she finds. It’s a bit odd and that bothered me at the end of this work.

Setting that aside, the action-adventure part of the work is well done and I liked that part of it, but the erotica just didn’t connect with me, there was something missing and because of that I just found myself turning the pages to get to the end of the work and see what happened there. At that point Abel reveals to Elizabeth that the next time she summons him, it will be the last, but gives her an option to think about. Thinking it a dream at first she doesn’t take that seriously. Finding that all was real leaves her a lot to think about.

While there was a good deal of explanation, of understanding, the erotica just fell apart and that hurt the work. It felt like there was a shift in the characters, especially Abel and I’m not sure that needed to happen here. 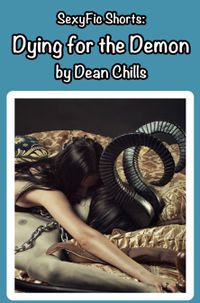 Dying for the Demon by Dean Chills

The third work in the series brings the overall story to a conclusion, but in doing so leaves some things unanswered, but in many other ways, some things are revealed that explain much of why things unfolded as they did.

A choice is given, a choice is made. What do you give up, do you do so, and more importantly, can you trust the one that asks you for the sacrifice? If the answer is yes, what do you receive in return for giving everything away?

Elizabeth cannot help but summon Abel for a third and final time. He takes her to an exotic beach, then to a remote cave. They have more impossibly wonderful sex in both places, leading up to a fateful decision. Elizabeth has had a fantastic three days, but is she willing to die for more?

Elizabeth comes to terms with Abel being real and makes a fateful decision. She is given all she desires in one night, but loses all that she is in the same evening. In the end, all that remains is Abel’s promise, his word, and what simply is.

Of the three parts of this series, the last is, by far, the best. That’s mainly to the story, the questions raised and all of the things that happen in it. When the conclusion arrives, it’s bittersweet in many ways for Elizabeth, but at the same time she’s given something she’s desired from the moment she saw Abel. Him.

The underpinnings of Abel’s existence are finally explained and they make sense in their own way. There’s a certain theme that has run through this series and it comes to the forefront here. Abel isn’t truly evil, it really never has been shown that he is, but some of his actions are. There is a moment in the story that I personally did not like as would have been just as happy not to have seen. It smacked of trying to make Abel “evil” for no good reason and that didn’t fit with all else that happened.

Throughout the story, Elizabeth is told that she must make a choice, over and over again, and she does think about it, over and over again. She is influenced, quite clearly, by Abel and whether that is a kind of mind control or not is open to interpretation. She does experience the highs, and regrettably, the lows that Abel offers and comes to a conclusion that, for her, makes some sense.

There are a series of hot flashes in this work, one as I mentioned that I didn’t like, but as a whole they are written well and I liked when Elizabeth had some control over things. Abel being forceful didn’t work and it felt like something that was tossed in at the last moment.

When the conclusion comes, Elizabeth makes a rather obvious choice and the warning that “no mortal can be with me more than three times” makes the answer to that riddle very clear. How that happens isn’t done by hand waving an explanation, it’s a clear, well thought out reason and how that unfolded worked overall. But, to be clear, it is a sad ending, one that I didn’t like for how sad it was, but at the same time, Elizabeth’s future does interest me.

The work doesn’t end on a cliffhanger, rather it ends by closing Elizabeth’s story and that of Abel, to allow them to pass out of this story and onto what comes next. While it is an ending, it’s a bit unsatisfying, mainly in that it is rather quick, to the point, and leaves things coming to an abrupt ending.

I could easily see a fourth work, or a what happens to Elizabeth as she discovers the after, but if that doesn’t happen it’s not a bad thing. The work is complete and that does have some satisfaction within that.

For the series as a whole, I felt that the promise of the stories and characters build up over time, but getting to that point took a lot of side trips and other unneeded moments that took away from the core story and the heat of the erotica. Given that the themes of each part of the series were as varied as they were, that the characters experienced a wide range of events, I think the author managed all of that well but needed to focus more on the core story.

I’ll give the series three out of five pitchforks.

A quick read, some good heat and two characters that were interesting. The series just needed more focus than it had at times…