A Review of the Demon Trilogy by Dean Chills

A Review of Eve Marshall: Succubus by Serene Makepeace 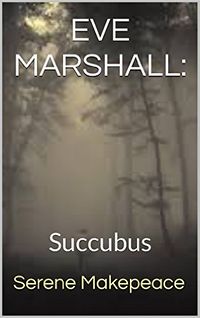 A review of a new book series that began just a few days ago today on the Tale. The main character seems to be a succubus, but she isn’t anything like one might expect her to be.

The question of revenge is one that can define who you are, but more importantly, what you are capable of. If what you are becomes intimately tied into what revenge you are seeking, then the question becomes if you can keep control of yourself, or if your darker needs consume you. Revenge is two-sided, so which side is the one that traps you? Because, in the end, you will be trapped somehow, by someone.

Eve Marshall is a woman on a mission to save her sister by any means necessary. Using all of her feminine guile and succubus charms, she removes all those that stand in her way. In this opening to the series we come across how it began, and her digressions with the wolfman and a reptilian.

Eve is a woman with a secret. When she is intimate with someone, they simply vanish into thin air, being consumed by her. When her sister goes missing, Eve takes it upon herself to find those responsible and make them pay. But when reality sets in, she has little choice but to join up with a group for help. But in doing so, Eve finds that she is losing herself to what she can do and the revenge she is seeking.

The story is, in many ways, a mixture of a mystery-adventure with a bit of erotica added in here and there. Overall, the story’s plot is interesting and there is just enough told about Eve’s past and the reasons for why she is on the path she is upon to hold the balance of the story together.

Eve herself has a very strong personality and her internal monologue is well defined and told. There is a bit of conflict within her, which I think adds more to her character as well. The question of whether she is a succubus or not is not exactly made clear however. She might be said to be a kind of succubus in what happens in the aftermath of being with another, but what happens is rather unique. There are no signs of horns or a tail, but there is a lot of supernatural themes and beings in the work, so Eve could well be this universe’s version of a succubus.

That all said, Eve’s singular focus in on finding her sister and finding revenge on those that have taken her. Because of this, Eve’s attitude, actions, and drive, all point towards that goal above all else and being so that mutes a lot of the rest of who she is. There is some told about that, about her sister, but it would have been nice to know more about each of them than what was told here.

There are two hot flashes of erotica in this work which are well written and have a good deal of heat in them both. They both tend to go a little over the top at a few points, which I think is mainly due to Eve’s abilities and what she does to those she is with. It isn’t so much the use of any sort of succubus ability, rather it is more about she being that which the other character wants and where things go from there.

The work needs a bit of editing, there are several points where misspelled words appear, at least one conversation doesn’t quite sound right as well. It would be nice if the author told more about Eve’s past and that of her sister going forwards as in this work that is mostly glossed over. The balance between erotica and story is fairly good, there being enough story to make the erotica mean something and make this more of a story about a woman that is a succubus than a succubus that is feeding on others.

I think there needs to be more told about Eve, her sister and what revolves around them and I am trusting that the author will expand upon that part of the story. Rushing into the adventure without really telling more than the barest of reasons why Eve is doing what she is, and not telling much about who she is, is a large piece of the puzzle that is missing. The story is interesting, I think it has promise and I hope that the next work will build upon this one well.