A Review of Dominating the Demon by Morgan Lockheart

A Review of Holidays in Hell by Erzabet Bishop 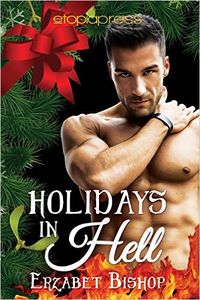 Holidays in Hell by Erzabet Bishop

A cute and lovely piece of Incubus erotica this time for review on the Tale. This particular work was first published in 2013 under the same title by this author, but then was removed from publication until just a few days ago. At the time it first appeared, I wasn’t able to obtain a copy and I’m rather pleased that I was able to now.

One of the questions that needs to be asked is not what do you want, but what do you desire? Some secrets are painful in that way, they are hard to accept and even harder to see one’s way clear. If it is possible to have what you want, does your past allow you or does it demand you resist?

This year Christmas just got a little hotter.

Deck the halls with all things kinky. Jonas is an incubus with an incurable lust for women, gingerbread, and holiday lights. He needs one more soul to meet his quota. Amid the baubles and frivolity of the Winter Carnival, he meets Holly Pendleton—a woman with emerald green eyes and a body built for sin—and marks her as the final soul to end his contract. But now Jonas faces a heart-wrenching decision: take what he needs to feed his hunger, or sacrifice himself for the woman who has lit his own demonic soul on fire. Tied up with red ribbons, Holly just might be Jonas’s deepest Christmas wish and the one woman who could set him free.

Holly Pendleton is still recovering from the death of her husband and Dom. The holidays are especially lonely until a dark stranger walks in the door to Harlowe’s Bookery and Christmas Shoppe. The man’s enigmatic gaze holds her and ignites her body and her mind. When Holly accepts a job to decorate the sexy client’s apartment, she unknowingly steps into an age-old battle between the forces of darkness. Jonas Corsair is a man who makes her blood run hot and her dreams even hotter. But will she survive his hold on her soul?

Jonas is coming to the end of his agreement which means, soon, with one more soul, he will no longer be an Incubus. It is Christmas, a time of the year that he loves above all else and it seems fitting that he will find the conclusion to his journey one way or the other. A chance encounter with Holly offers him what he needs, but at the same time it offers what he’s always desired. For Holly, Jonas seemed to be the answer to her prayers, but it may also be more than she ever expected.

The work as a whole is a lovely and cute story about the collision of two souls that have their needs and in finding a connection, things don’t quite go as either of them expected. Jonas, the incubus of the story, isn’t the stereotypical incubus, though it is clear that his past actions are to draw souls to hell. Even so, from the very beginning he’s a different sort of soul, still having some of his innocence in a way and Christmas tends to bring that more out in him to the annoyance of Mallory, a succubus he knows.

Mallory is a minor character, but at the same time she fulfills an important role and while that works, she has a personality that is rather grating at times. While Jonas and Holly are well fleshed out, Mallory is a bit thin and that’s a shame because her personality, when she is present, does tend to overcome all other characters in the scene.

That said, the story itself has some very sad moments, especially around Holly, and those are the moments which define her character and explain a lot of her motivation. She’s suffered greatly, and at the beginning of the work, and at one other point in it, that weighs upon her. This is the thing that bothers me the most about this story. Holly is torn, she’s held by her memories, her needs, and while Jonas is an incubus, and there is some hint of he using his powers to attract Holly, I didn’t think it felt right. By that I mean Holly moves so quickly from grieving to accepting Jonas, and in a very personally important manner, that it doesn’t quite ring true. Those that know a deep, soulful D/s relationship will understand what I mean by that.

The erotica doesn’t overpower the story and that’s important because there are several plots that run throughout the work. There’s a good balance between the erotica and the storytelling, the two merge well together when they are intended to. But there’s a lot of background in all of the characters that is only hinted at and never really is played out well. Mallory is a vague character for the most part, save her personality. Jonas talks about how he became an incubus, but there are no details. Holly remembers her tragedy, but doesn’t tell much about it. There are just little whispers of the overall idea, but nothing in specific and that I think took a lot from the story at one important point.

The climax of the work is rather unexpected, adding another dimension to the events of the story, of Jonas’ and Holly’s past. But it happens so quickly, the solution to Jonas’ problem coming in the blink of an eye that it just felt too rushed by far. I would have liked fewer characters in that moment than there are because there just seemed to be too much going on.

I think the one thing missing in this work was telling more about the past of Holly, Jonas, Mallory and all of the other characters. There’s just enough to give them some substance, some meaning, but the real questions about them are set aside for moving onto the encounter, the erotica, and the aftermath. I wish that more time had been spent with Holly coming to terms with her past because that I think would have made the conclusion so much more satisfying than it turned out to be.