A Review of Holidays in Hell by Erzabet Bishop

A Review of Dominating the Demon by Morgan Lockheart 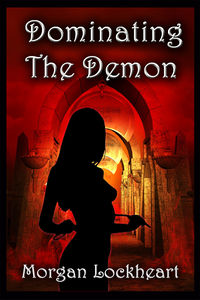 Dominating the Demon by Morgan Lockheart

Sometimes the point of a story is simply to get to the erotica. While there can be some time spent in setting up the characters, the events leading towards the erotica and perhaps even speak of some themes at a tangent to the erotica, many times it is the erotica that matters the most.

If that happens, and it does a lot of the time, then the erotica needs to be, more than anything else, interesting or if not that, at least have some kind of heat in it. Getting that heat, when a story is mainly one sex scene after the next is a challenge.

It is Halloween night, when magic and mischief are abroad. Zoe, Briah and Jackie, a trio of witches seeking power call forth a demon from the lower pits of Hell using an ancient rite, binding him to our plane of existence for a short time. Arrogant and powerful, the demon is used to enslaving those who summon him and turning them into his servants so he is quite unprepared when they use a cunning plan to turn the tables on him.

Now bound and helpless, the demon lord is unable to stop the three witches from using his muscular and powerful body for their own carnal pleasures, forcing him to pleasure them in any way they choose. This night, he is their servant and they are his masters and whatever they demand of him, he must do. Little does he suspect that their sordid desires hide their true intention: to take his power and steal his infernal throne!

Zoe, Briah and Jackie gather on Halloween and summon a demon, play a risky game, and see if they can keep the upper hand through it all. One by one they take from the demon, but in the end the question is whether they won or if they actually lost and don’t know it.

The beginning of the work held some promise in that the background of the main characters was interesting and I thought that the time spent in telling of their lives, what they had done in the past as witches and what happened as a result, played well and interested me. Considering the length of time that took, building towards the main core of the story, I expected something more than what I read beyond that.

Once the summoning occurs, and the trap is sprung, the story devolves a bit into three individual sex stories tied together by what each of the women does to the trapped demon. There isn’t much in the way of anything beyond the erotica, save for some tangential references to domination and submission, a lot of yelling on the demon’s part and some rather odd remarks by each of the women as the story unfolds.

The demon is, as a whole, a stereotypical incubus, which didn’t interest me. There just wasn’t anything that I found to latch onto that would want me to know what happened next to him, or what dangers the women faced as their plan unfolded. It was a lot of fury that amounted to a lot of nothing as a whole and that didn’t work for me.

For me personally, I didn’t find that there was much heat in each of the scenes. I found that I didn’t like any of the characters all that much, that the story turned from being interesting into something that I just kept turning the pages hoping that some of the story seen at the beginning would return. But it really didn’t.

There was something missing and because there was the heat just didn’t build as much as I had hoped it would. There wasn’t something to make me want to see what happened to each of the characters as well. I felt disconnected from the story when I shouldn’t have been. I think that a good part of that was just that each of the woman had an attitude and personality that just rubbed me the wrong way. The same can be said of the incubus of the work, his attitude was even more grating.

While the writing itself was good and descriptive, that couldn’t make up for my not being involved in the story more deeply and i wanted to be. That promise at the beginning mattered and it just didn’t play out over the work. That’s the largest shame here of all.

Perhaps less focus on the erotica would have been helpful. Certainly a lot less yelling and a bit more character building would have been good too. Expected more and just didn’t see it.