Succubi Image of the Week 412

A Review of Lilith by Fran Heckrotte 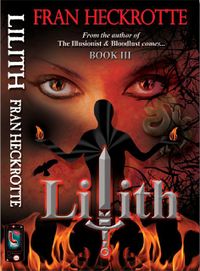 A little while ago I reviewed the work Warrior Demoness by Fran Heckrotte which you can find here on the Tale. The work was part of a series released a very long time ago which had within it the appearance of many myths and legends, telling the story of some of the more well known, but also stories about others around them. The sad part was that to find any copies of this series is really very difficult. In reading the work, there was a character named Lilith in it and I went on a search for the book bearing her name that was part of the series.

After a long search I found a paperback copy and so, finally, I am going to review that work as well here on the Tale.

It is, as a whole, always best to learn stories of the past from the ones that had experienced it. You can find, many times, their truth is more interesting than the fiction.

Yemaya, the Illusionist, and her journalist partner Dakota, find themselves embroiled in a search for the person responsible for the rape and torture of a young Carpi woman, attending a university in the States. When they decide to visit a local nightclub for women only, they find the owner and her employees unusual. Dakota feels mysteriously attracted to one of the clientele while Yemaya recognizes a kindred spirit-in Lilith, the club’s owner. Spiritual ancestors, missing whores, a sadistic exporter and new acquaintances lead the two lovers into an adventure of biblical proportion.

Lilith, She was a demoness, as old as humanity itself. Now the owner of a women’s only nightclub and part owner of the Sisterhood, a small group of whores who have banned together to create a better life for themselves, it was her job to protect those women who were putting so much trust in her. When a local pimp, decides to eliminate his competition Lilith and her two demon partners want revenge– and no one knows better how to exact it than demons. This is a revelation of the past, the present and the events that forever changed the course of human history.

There is a bar called Lilith’s where the people you meet aren’t exactly what you think they are. There is a group called the Sisterhood who do and are more than anyone can expect them to be. In the midst of all of this is Lilith and she is not, at all, what she is expected to be.

This work is actually two distinct works in one. But while that is true, they also both turn about Lilith, her past and her present, and in doing so creates a mythology around her in this universe that is, as a whole, so much more interesting than many that I have seen about her.

The Lilith of this work isn’t, most importantly, written in the stereotypical ways that most authors use to express who she is. While she is Lilith, and most of her story is what is well known, it takes several interesting branches away from that main story and creates a new mythology around her and it is one that I personally think tells so much more and is so much better than the myth of today.

Beyond Lilith herself, there are other Succubus-like and Cambion characters that appear who, again, are not written in a way that they are transparently there in the story to be filler. They have their own stories to tell, to share, and lives and loves to encounter. They are all amazing characters and as the story continues they grow in many unexpected ways that I liked.

While this is part of an overall series, I didn’t feel like I was missing out on any of the main character stories and in doing so the work didn’t feel like it was losing its way or that I needed to have an understanding of something that had come before in the series. It is a full, self-contained story, strongly written, and quite enjoyable.

There is a bit of erotica mixed into the story, but it is there to provide some character development and isn’t out of place. It is a very long work, and does drift away from the core story on occasion, but that has to be expected as there are some points which set up future works in the series.

But the one thing that held me was just how Lilith’s story was told. More than that, there is a revelation that fits into her story well, makes sense, and turns the work in an unexpected direction, Lilith’s character, as complex as it is, and as much as she has been through, still has purpose and meaning in spite of how long she has been in existence. There were moments that I couldn’t help but smile over, others that brought tears to my eyes and in that, this Lilith is one of the best that I have ever seen.

I wish that there had been a better placing of Lilith’s story in the work however. It reads very much like two stories that are connected together by the thread of the main characters being involved in two different problems. The former story focused most of its attention on the main characters, and in the latter Lilith and her story and Lilith in the current time, take up the focus with the main series characters only appearing sparingly. It isn’t a huge problem, but somehow I think that the two stories might have been connected together better or interwoven more.

An amazing story in many ways but one that I am sad to say is extremely difficult to find. That is the largest shame and one that I really think shouldn’t be so. Possibly the most interesting characterization of Lilith that I have ever read and I am very pleased that I did.