A Review of Lilith by Fran Heckrotte 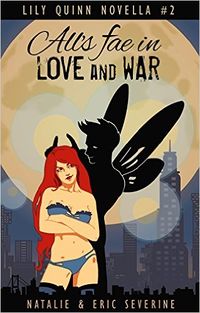 The second review of the ongoing series called Lily Quinn written by Natalie and Eric Severine. I reviewed the first work in the series last month on the Tale and you can find that review here. At the time of that review I noted that I wanted to know more about Lily, her past, her life even if it meant toning down the erotica to a point. I felt like there was a lot to tell about her and I wanted that to unfold going forwards in the series.

There’s more to being a Succubus than just having a body that everyone wants. Yes, the sex is part of you, yes there will be those moments when all there is, for that moment, is the pleasures given and taken. But along the way its always good to remember who you are, where you came from, and some of the people that got you where you are.

My name is Lily Quinn. I’m a half-succubus bounty hunter. I work for the College, a secret cabal of wizards who pay me well to deal with monsters. You wouldn’t believe my résumé – or my little black book.

But speaking of books, some kind of ancient tome has gone missing from the College’s library. I’m not sure why this book is so important, but the wizards are offering a huge reward of alchemically transmuted gold to have it returned, along with the thief who stole it. So now I’ve got a lead on an Unseelie fairy who likes leather and a challenge. What a coincidence. So do I.

I’m going to have a great time questioning this thief about where to find the book… but I have to catch him first.

Lily finds herself in a new challenge. A book is missing and finding out who stole it, and why, will mean using all of her sources of information. And if there is some fun along the way, there’s nothing wrong with that is there? But eventually the fun and games turn very serious and Lily discovers that sometimes the things in the shadows aren’t the things you need to worry about… they’re just the warning.

I expected more from this work as Lily’s persona was established in the first work in the series. There needed to be more about Lily herself, more than just her casual and, at times, flippant thoughts about herself. I wanted to know more about Lily’s past, who her parents were, who taught her, how she came to be where she is now in her life. I expected that there would be quite a lot of erotica tied into the story and otherwise. As a whole, some of those things were accomplished here, but there are a few things missing.

The first point, about Lily herself, came mainly from some moments in her day at home, which I admit I laughed over at several points, especially about a comment she made about her computer. There’s also a neat little touch about a certain pair of slippers she owned that I adored so much. These little things about Lily’s personality, her quirks, added quite a lot to her as a whole and made her a more fleshed out character than she was in the first work in the series.

A second character, who is smitten with Lily, though he can’t admit it, was fun, but there was a strange undercurrent of desire chained to duty that give the moment an odd feeling. That scene with Lily using her knowledge of him, and giving him something he’s always desired, was very hot and had the barest touch of succubus mind control, but that didn’t feel out of place. I rather hope there’s something more to be seen in that relationship, even if it is a problem for both of them.

Lily’s target in this work, Kalen, is in a lot of ways a kind of mirror for Lily and seeing her fall, in a way, but he as well, fall, is a rather unique set of scenes that play out and come to a climax which Lily wanted, but didn’t expect the outcome of. It put Lily on her heels, making her think, and I liked that because it showed that she was more than she appeared to be. That’s important because the erotica otherwise in this work made well over half of the story, over three flashes, and it might have been too much. But having that interspersed with some serious moments, and a little humour, made this work better overall.

The writing is as strong as the first work, Lily’s internal monologue is really well done and focused, and I liked that. The storytelling is very good, every character speaks with a clear voice, a different perspective and that was good to see continued. While the work does clearly say that there is a lot of erotica in the series, I just felt as if there was too much for how long the story was. It wasn’t so much that it was out of place however. More story between the erotica I think would have been nice to see and make this more that it turned out to be.

I liked that there was more of Lily’s past being told, the people that matter in her life coming out, even that there were little moments of Lily’s “normal” day that made me smile. The erotica was a bit over the top, even for Lily as a Succubus at some points, and I felt that hurt the overall story and plot arcs to an extent. There is so much in Lily’s character, personality, and all of her that isn’t focused on having intimate moments with everyone she encounters that it needs to be more present overall I feel.

A body made for sex isn’t as interesting as the mind behind it. Telling more of that story is something I would like to see. The next work in this series, The Beast Within, will be released at the end of December. I hope that what seems to be a series plot arc becomes more prevalent in the next work and going forwards… We’ll see.