A Review of Desired by the Demons by Amber Delray

A Review of Possessed By The Bed! by Casey Regal 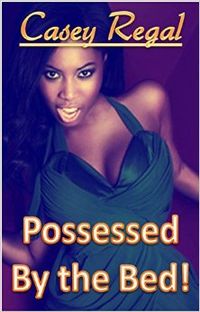 Possessed By The Bed! by Casey Regal

There are those works that just demand a part two, or three, or more. They have an idea, a core plot, that does something a little different from which the story builds upon. Possession stories aren’t anything new in which Succubi appear, really there are a lot of them to be found. But there’s one thing that is difficult to get right and that’s the transformation itself of the character, or characters.

Getting the heat right, the physical transformation is one thing, but it’s the mental changes, or the mind control, or how things develop once the Succubus has control that matters. If that all works, that something I find really captivating.

Thirty years ago, a demon of lust was cast out of a woman, sent back to the pit…or was it? Surely it couldn’t have simply taken up residence in the old bedstead, staying dormant as it waited for a new owner. Surely that bed that Susan just bought isn’t really turning her from a human stick-figure into a curvy, lusty…bimbo?!

Susan discovers a bed in a second-hand store and once she takes it home, she find her thoughts, then her body, are changing. The date she had planned doesn’t quite go as she expected, and things aren’t going to be the same.

There’s a lot of mystery in this work which really revolves around the mysterious bed, what sort of being is within it. For the most part, it could be a succubus, all of the signs are there, and even if it is a “demon of lust” there’s Susan’s transformation itself. Susan becomes very much a succubus, or at least the appearance of one, the powers of one, and certainly the sexual drive of one.

The transformation is really well done, being something that happens a little bit at a time, slowly taking over Susan’s thoughts, body, and personality. It’s very much a “slow burn” and I enjoyed that because there was, along the way, some realization by Susan that something was happening, but that alone wasn’t enough for her to overcome it.

Susan is, for the most part, still Susan when it is over, but she’s singularly focused, her personality changed to what the unnamed succubus desires. Susan’s date isn’t changed physically, but mentally there is quite a lot of succubus mind control which is, like for Susan, a slowly burning plot which breaks at a good point in the story.

For one, what exactly is within the bed isn’t told, only mentioned in a vague way in the prologue which sets everything else up. It’s more of a presence hinted at, suggested, but not really developed and I think it should have been. Following onto that comes the ending of the work, in which a third character is drawn into the clutches of the succubus and a suggestion is made about where there story will go from that point onwards, but it doesn’t.

The work ends rather abruptly, offering a direction for the story to take, even a series to be developed from this first work. Really the concept I liked, the characters are interesting and the heat is just perfect overall. But there’s a lot of “why” and “what if” to explore and explain and it wasn’t here.

The work needs a part two and onwards to tell the story, to explain what’s going on. I’d like to know if Susan is a Succubus now, what happens to the other characters in the work, who, or what, is the Succubus in the bed and otherwise. There’s a lot of story to tell and I have been expecting a part two for months now. That hasn’t happened and it needs to.

There’s not anything like enough explanation about what exactly is going on with Susan, the plot summary being the only thing that gives a real clue about that. The transformation, the mind control, and the erotica is very hot as well done. The ending is far too quick, leaving so much open for another work to appear and it hasn’t at the time of this review.

I hope it does, because I’d like to see what happens next and why.