A Review of Possessed By The Bed! by Casey Regal

A Review of Desired by the Demons by Amber Delray 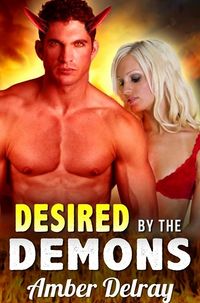 Desired by the Demons by Amber Delray

It’s a little more bothersome when the story begins with two characters who work well together and then one of them leaves before really anything of consequence happens. When that happens part of the story leaves with them and, as a whole, investing time into a character to have them just walk out of the story seems wrong.

Ann is willing to sell her soul for the ultimate sensual satisfaction.

But when the Gates of Hell open wide to grant her wish, she gets more than she ever dreamed possible.

Beware of what you wish for … some sins can never be forgiven.

Ann is not exactly enjoying her birthday. Her best friend comes over and they have a little bit more than a good time. Deciding to use a Ouija board as a joke, they summon a demon who then brings a friend along to share the fun. When Ann’s girlfriend leaves, Ann is left with two Incubi looking for a good time… and she’s it.

Generally in stories like this, there is a focus on getting to the erotica as quickly as possible, rushing through that, and then ending the work with really no substance to it as a whole. That doesn’t happen in this work as there is a good deal of time spent with Ann and her girlfriend talking about their lives and loves, their past, and the relationship they have with each other. It’s actually a really good bit of character development for both of them and I though that worked well.

However, Ann’s girlfriend leaves moments before the erotica begins when she gets cold feet after the Incubi arrive on the scene. It’s disappointing because for all of the time the author spent in telling the story of Ann and her girlfriend, it felt like she could have just as well not been there, or just left a gift for Ann and the same result would have happened. It’s a bit of a problem because the two of them together are, overall, more interesting than Ann is alone. While the point of the story is for Ann to have her moment with the two Incubi, and I understand that, the author took away the opportunity to tell a larger story, possibly with a different ending, and that would have been a better story overall I think.

The two incubi, Damien and Victor, are, as a whole, not “evil” or stereotypical which I appreciated. In works with a similar theme, the writers usually fall into that meme far too often and it was refreshing to see that not happen. There’s no question that the two Incubi are summoned for the sake of pleasure and they are more than willing to do so. When Ann is the only one left, she is left to their mercy in a lot of ways.

The erotica is, as I noted, a hot flash, but there’s a feeling of that being rushed at times, or perhaps a few paragraphs here and there were removed. The heat comes and goes, as does Ann, and that was slightly disappointing. If Ann’s girlfriend had been there as well, I think that could have added some needed heat, possibly a bit of mind control or at least showing more of the differences between the two Incubi and also what Ann and her girlfriend enjoy as they have quite different tastes and needs.

The writing is good, the story starts out well before it slips into the erotica, and the humour in the beginning I did like quite a lot. It told of the personality that Ann and her girlfriend had and I thought that worked well. Damien and Victor as well are different in their own ways which again made the work better overall. Nonetheless there’s a gap in the story created when Ann’s girlfriend leaves and that’s a shame for all of the building up that happened from the beginning.

Some quirky humour, a neatly told story, and as a whole a quick hot flash with just enough story behind it to give it substance. A few points where the story could have been made to be more than the erotica that drives it forwards, and sadly missed out on.