A Review of Siren’s Heat by Lillian Oliver

A Review of The Incubus Club series by Cora Blanchett 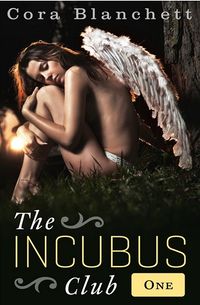 The Incubus Club 1 by Cora Blanchett

A review today of the series The Incubus Club by Cora Blanchett, a series that I thought had an interesting premise, good characters, and a hot story. But, unfortunately, the series came to an abrupt end after the second work in the series leaving a really good series unfinished and wanting.

Sometimes the attraction for another leads to doing things that you never expected. To take a chance, to discover that a myth is real. But then what happens when the myth and the reality meet head on? What do you do then?

When her co-worker catches Liv pining over their boss, Liv admits to being in a bit of a dry spell. It was hard for her to find men—and when she did, none of them seemed to measure up. Were her standards too high? Was her infatuation with her boss in the way? Whatever the case, Liv was at a loss for love.

Her co-worker proposes a daring, seemingly-absurd solution: why not summon a sex demon?

Liv is infatuated with her boss, but can’t do anything about it. Given the option to summon an Incubus to help her deal with things, Live does so. The Incubus takes the form of her boss, she has a night of amazing sex and then discovers that not only are Incubi real, but Succubi are as well. And there’s another secret she didn’t expect that changes her world.

As the beginning to a series, this work sets up a really good premise with a group of characters that fit together well, have their own personalities, needs and wants. It isn’t a simple hot flash, there’s a good deal of world building, of setting up the rules, and making things work together well. Liv, the main character, is very strong in her personality and as she tells the story of what happens around her, it seems real, well explained, and no detail is left out.

These are all good things because it sets up a solid story to which the erotica when it comes into the work, plays off of. The erotica isn’t a short hot flash either, there is build up, passions, moments that Liv and the Incubus she summons pass through. There’s a bit of D/s relationship that pops up very slightly, but it doesn’t overwhelm the feel of what happens to Liv and I liked that a lot.

The incubus himself isn’t named in this work, that comes in the second, but he isn’t stereotypically evil or nasty by any means. It’s made clear that both Succubi and Incubi live from the sexual energy of those they are with and in that comes a hotter story because it is the passions that move the story along towards an ending that works really well. We don’t see his true form either, he only appears as a “perfect” version of Liv’s boss, but it’s clear from the little descriptive hints that there is more to him.

The erotica doesn’t overpower the story, really it merges nicely into the narrative. The mix of story and heat in the latter half of the work I thought worked really well. It wasn’t simply a moment of sex and then the scene was over. There was development in the story, in the characters and as well the way things unfolded felt right for the setting and Liv herself.

The only thing that bothered me was that it was a bit short, there were some points at which further story could have been told or the Incubus could have explained things to Liv a bit more. There was a couple of points where I felt like there was a missing chapter between two moments, or at least a few pages, and that tripped me up a bit. But otherwise, this was an amazingly good story to set up a new series.

A really well told story, some lovely heat and a concept that really has a story to tell. 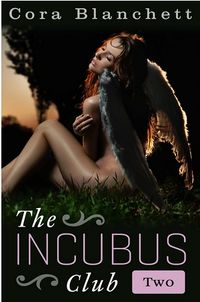 The Incubus Club 2 by Cora Blanchett

In the second book, Liv finds out that her boss has secrets too which only serves to complicate things even more.

And what happens next?

Olivia has just discovered that her boss, and long-time crush, has been summoning a succubus—a succubus that looks just like her. What does this mean? Does he have a crush on her, too? Has he been going behind her back, with this succubus, without Olivia’s knowledge?

When Olivia decides to take a stress day, things get steamy when she summons her own demon for answers.

Liv goes back to her office and finds out that she can see the Incubus that her co-worker had summoned. She also finds out that her boss has a Succubus that looks exactly like her. Not being able to handle things, Liv goes home to her Incubus and tries to cope. But coping takes many different forms.

In this work we find out that Liv’s Incubus is named Caelum, her co-worker’s Incubus is named Jorge as well. But we don’t find out the name of the Succubus that her boss summoned that looks like her. Liv also finds out that she can now see the Incubi and Succubi around her, they can see her as well and then things get more complicated.

The main thing about this book is that the theme is consequences. Liv’s summoning of Caelum has a cost to her, the summoning of a Succubus by her boss has another one. The same is true of her co-worker. In all of this going around and summoning sex demons, the things that each of them want is taken away because of their actions.

Because Liv summoned Caelum, she’s not able to deal with her boss. Because her boss summoned a Succubus, he’s unable to make amends with Liv. It’s clear that they want each other, and badly, but there is something between them that neither can really get past because in each case, they are being interfered with.

There is a lot of self-recrimination that both of the main characters need to deal with, but they really don’t. In Liv’s case she runs off, pouts for a while, then goes back to Caelum. Even when her boss appears and wants to talk to her about it, she pushes him away, has sex with Caelum, gives him a name, and then… the story ends.

It’s a bit disappointing because the start of this work really sets up something unique and interesting but doesn’t try to find a solution to the problems. The path is towards another hot session of sex of Liv, but with the twist of Liv wanting to see Caelum’s real form. That in itself I liked because he wasn’t stereotypically evil in appearance, though there are hints of something else about him however.

Really nothing is said about the Succubus in this work, other than she looks like Liv, but sexier. Otherwise her name isn’t told and it’s only a fleeting glimpse of her. I really wanted to know more about her when she appeared, and I would have been happy with a cut scene between the Succubus and Liv’s boss that explains why he summoned her, gave her name, made her more than just appearing for the shock value.

The erotica is just as hot as in the first work, the story itself is every bit as good, but the story doesn’t really resolve anything and that’s the real problem here as there never was a part three to the series. The work ended on a cliffhanger for all of the characters, everything in a mess, and the future uncertain.

I wish there would have been a part three to tie things up or continue the story, but it didn’t happens and that’s more the shame. The series started out amazingly, seemed to have a lot of promise and then… stopped.

I’ll give this work four of out five pitchforks.

I still hope for a continuation, really the series needs this for all of the promise and perhaps, someday that will happen. I can hope for that at least…