Succubi Image of the Week 411

A Review of The Incubus Club series by Cora Blanchett

A Review of Siren’s Heat by Lillian Oliver 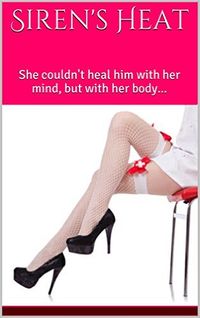 When a character’s background is created for a story, no matter how short the story may be, if there is mention of an event, it should be explored. It isn’t enough to say that someone was “hurt” or something similar. That lessens the impact of the event, leaving it open to interpretation.

It is more so when the character’s life is changed, a fear is created, and then, when the story forces them to confront that fear, they cannot explain it or are not allowed to. Really that is a problem because in telling that story what happens in the here and now makes much more sense than it does otherwise.

Laura left a dark past behind her to become a doctor, but when a handsome stranger is brought to her hospital, she is in danger of being sucked back in. He makes her feel things she never has before, and she soon can’t help but want him in her heat, healing him the way only she can.

Laura hides a tragic event in her past from all around her. She is a siren, one that found herself hurt in unimaginable ways by an incubus. Turning to the world of humans to hide herself, never knowing pleasure, she is confronted by a dying incubus in her hospital and now there’s no where for her to run.

The work is a hot flash with very little background about Laura and even less so about Liam, the incubus of the work. While Liam is somewhat of an enigma, Laura’s story is told to an extent, but really only in passing. What’s troubling about that is Liam doesn’t really seem to care all that much for the most part, driving towards a singular goal. Even when Laura, in a way, explains a small fraction of her fear, that seems to be glossed over for the erotica that follows.

The problem with this is that the fear in Laura is a telling one, it’s clear that what she has encountered is a nightmare to her. But why that is, how it happened, isn’t explained. It is more than a “bad experience” and that is clearly told in her words. Liam does offer some sympathy, but that’s following his use of his powers to overcome her fears and reluctance.

Liam dominates the work, controlling what happens. While in doing so he opens Laura’s eyes to the fact that not all incubi are bad, there’s just something that feels wrong about the entire exchange and how everything unfolds. Laura does by the end of the work, have a different view of herself and Liam, which makes sense and works for the most part. The final lines of the work adding a little bit of needed humour as well.

There are points in the work were the story reads oddly, the dialog seeming wrong somehow. There are some inconsistencies in the story, right from the first page as well. An announcement in the hospital says one time and then the message is repeated with a longer period of time. There are some points where character names do not have capitals. But the single thing that I found the most troubling was hinting at Laura’s past, giving an idea of what she fears, not saying what, and then just sort of brushing that aside without much thought.

Considering the erotica, which is really quite hot, makes a connection between the characters, and offers a glimpse of what their world outside of humanity is like, there’s not all that much story past the opening. It would have been nice to know “why” when most of what comes out of the story is “how”. A better balance of background, story and erotica i think would have done this work a world of good overall

The work needs another editing pass, there are quite a number of errors that should have been corrected. Not exploring Laura’s fears took much away from her character as well. A loss of oneself to another is a difficult thing, but more so when it is the thing you fear the most. No amount of erotica can overcome that fear when it isn’t explained and then overcome.