A Review of Devilish Dazzle by Gregor Daniels 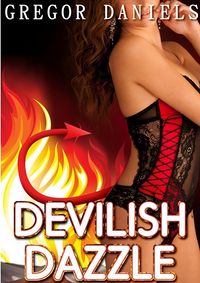 Occasionally a story has a rather serious problem. The characters could be interesting, the moments in the story could work well. There’s even the possibility that the erotica might be quite well done. The issue comes when something happens that is very stereotypical happens, or a well used trope is used far too much. In either case, or both, it makes it hard to care about the characters, never mind the story, and that’s a problem.

It shouldn’t happen, but then, sometimes, that turns out to be the point of the story in the end.

Unable to get into a popular club, a wishful thought causes a young man to meet a dazzling woman clad all in red. While her motives are a mystery from the beginning, the wishes she offers are absolutely real. However, the strange woman grants Blake’s desires with increasingly twisted results, and she is expecting a payment in return when all of the wishes are used up.

Blake is miffed that he can’t get into a club. He meets Nevaeh who offers to grant his wishes for a price. The problem is that the wishes all go wrong, he is using them all up quickly and there’s a price to be paid. In more ways than one.

I really couldn’t find my way into this story for the simple reason that there were, as a whole, quite a number of story tropes being used, the main one being about how wishes made tend to go wrong, and it kept repeating that trope over and over again. Add to that a genie/devil/succubus who was quite obviously evil and well over the top in that from the beginning and the story lost a lot of its appeal within the first few pages.

Nevaeh, who is the Succubus/Devil/Genie of the work, is really a stereotypical wish granter that sees to it that all of the wishes go wrong so that Blake uses them all up as quickly as possible. Then, of course, Blake has to pay for his wishes and Nevaeh, of course, wants to claim his soul. Before that happens, Blake makes a series of vague wishes that just leave himself open to having things go wrong. When he attempts to stop wishing, Nevaeh of course ropes him into making more and on the story goes.

It was, as a whole, an uninspiring series of vignettes that didn’t hold my interest very much. Even when the story arrived at the climax, which takes a somewhat amusing turn, that wasn’t enough. As well, the final part of the story pushed the work directly into ironic and in a sad way that I didn’t care for all that much.

It’s hard to enjoy a story when the main character is really, as a whole, unlikable, the Succubus herself isn’t really interesting at all either, and the overall story just goes from one disaster to another. As hot as the erotica was at times, it couldn’t overcome the basic problem of not caring about the characters and story very much.

All of this is, of course, only my feelings over this work. The thing is that this author has written some really wonderful Succubus themed books in the past and I liked the majority of them. I went into this work expecting to have a similar experience… and didn’t. Overall, the work feels more like a study in what goes wrong when you make a deal with a devil… not one of the Succubi. As such, and thinking about it in that way, it’s clear to me why I didn’t enjoy this work very much.

I just couldn’t find myself caring about any of the characters in the work, and Nevaeh being so very stereotypical in her words and actions made that more difficult still. It’s a shame really, there was some promise, but it didn’t help as much as I had hoped.