A Review of Succubus: Book One (Devour) by Simone Evars

A Review of Taken by the Demon by Katie Riddle 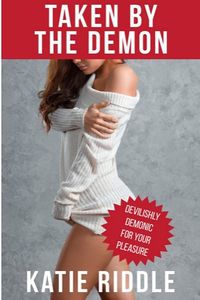 Taken by the Demon by Katie Riddle

Origin stories about Succubi always interest me. I like to find out about someone before they became one of the Succubi. I’d rather know who they were and why they changed or became than just having them appear in a story with no background or explanation.

The better stories about this, at least for me, are the ones where things turn in a direction unexpected from where the story began. Mix in a bit of humour, some strong characters and it gets better. Perhaps the Succubus need not be selfless, but even then, they can do good…

Chelsea Foster is an average citizen in the grip of a town now controlled by a powerful demon. In order to save her town, she’ll give herself to Molock, a powerful demon who has some extreme demands. He’ll take her offer. And he’ll take her on the town’s stage, in front of the entire town.

A demon takes over a town, makes demands, and eventually a sacrifice is needed. It might save the town, it might not, but Chelsea decides to be that sacrifice. She’s alone in the town, owes the people there in ways she can never repay… or can she?

This is, as a whole, really an origin story and as such I am hoping that Chelsea’s story will continue from here. There is a wonderful story built up through the work, one that’s gripping and holds your attention as things happen. More, watching as things unfold from Chelsea’s eyes makes for a story that has a lot of emotion and history behind it. As well, and what caught my attention, was the little hints that Chelsea was… different. It wasn’t really explained, but here and there the hint was made that she was waiting for something in her life and the events around her seemed to bring her towards that moment.

Chelsea herself is a very complex personality and I liked that because she held the work together from the first moment. Seeing what happened through her eyes brought the story into a very sharp focus, but it also allowed for little bits of dark humour to pop up here and there that just added to the tapestry of the writing. As the story moves onwards towards Chelsea meeting her destiny with the demon, you come to expect the story to go in a stereotypical direction. At first it seems to, the signs are all there, but then it takes a turn and that’s when things change.

As does Chelsea herself. By the end of the work, Chelsea has been transformed, referred to as a Succubus, and isn’t quite the same person that she was at the beginning. It’s never quite clear what the transformed Chelsea looks like, save for a few offhand mentions about fingernails and the change within herself. But the main thing is that she has an attitude that leans towards having done good than being evil and I really like that approach.

After the erotica, the transformation, and the last thoughts of Chelsea as she disappears, there’s a good bit of closure to the story and a last thought about Chelsea herself. It also leaves the way open to Chelsea appearing again in a followup work and I’d like to see that happen. Especially since another character in the work seems like the likely means of doing so.

The story, as I have said, it well told, strong and I enjoyed it very much. The erotica was, at its best, a hot flash with some rougher moments, but when Chelsea transformed and the story turned that unexpected corner, that’s when this work came together for me. I would have liked to have had more time with Chelsea, perhaps a flashback to where she came from, some truth about her other than the story that the town knew about her. It would have been nice to have seen Chelsea in the afterwards, looking back on this moment in her life and making a comment herself about things.

Perhaps there will be a part two. I think she has a lot more story to tell and I hope that happens.

A really good story that builds towards a well told piece of erotica. I liked Chelsea, I really liked her a lot and it would be nice to see what happens to her in the “after”… Somehow I have the feeling that she isn’t, at all, stereotypical.