A Review of Taken by the Demon by Katie Riddle

A Review of Succubus: Book One (Devour) by Simone Evars 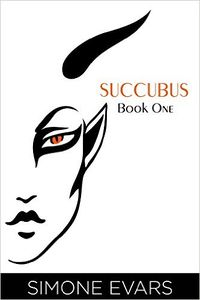 There are some characters that, for one reason or another, seem to resist developing through a story. Whether that is their personality, they being in a rut, or simply not seeing that they can be more than they are. they don’t change. Being “ancient” isn’t a good reason of that. It is an excuse.

While this resistance to change can be simply what they are, it doesn’t always reflect who they are. When confronted with, or by, something or someone that gives them pause, there is the chance to change. If they cannot see that, if they only lie to themselves, that doesn’t necessarily make for a better story. Most of the time it only leads to questions.

Qarinah the demoness had things pretty good. Travel, wealth, beauty….And immortality through devouring human souls. When she meets Renard her easy life is upended as her hunger for human flesh is intensified. She comes to the conclusion that if she devours him, she can regain her control.

Qarinah seeks out those that have done evil to women for a price. She has done so for longer than she can remember. An encounter with a man leaves her confused and needing him. But he isn’t what she expects and her hunt for him leads to something unexpected.

At the beginning of the work, it is very hard to like Qarinah overall. There’s little in the way of seduction, of being more than a being that seeks to consume others. Really that is her entire purpose for being and she is very focused upon that. This is made more clear through several encounters where she ends the lives of those that have done evil things and with that comes a certain acceptance of that being how things are for her.

But it is her thoughts, her very cold internal monologue that drives a wedge through most of the story in finding a way to like her. She’s so focused on the hunt and the kill that all else about her is pushed to the background. At least until she meets Renard and she is confronted with a mystery, but also a growing need within her that she cannot understand.

Once past the first encounter, there’s more focus on Qarinah trying to understand herself, her needs, and trying to ensnare Renard over and over again. This works, for the most part, but there is a lot of internal friction within Qarinah that is spoken of, but really isn’t explored. She tries to ignore as much as she can and while that is a valid response, all it accomplishes is to ramp up her needs and confusion.

The final third of the work tells of Qarinah with Renard, he revealing something which shocks Qarinah and forces her to reveal herself. At this point I expected the previous events in the work to come again, but thankfully they do not. The encounter is tentative, unsure for both of them, but once that passes, there is a wonderful heat in the erotica that was missing prior to that point. It is, by far, the most telling part because Qarinah is made to feel. She didn’t before and that was enjoyable and seemed to suggest that her character was developing.

The ending is short, though it does offer some really interesting paths for the series to take going forwards. However, in spite of what happened between Qarinah and Renard, Qarinah herself falls back into herself, returning to who she was before and it was a little disappointing. But there is one point that does give some promise, that being Renard himself, and I think that tells something important.

There are some problems in the work however. It does need at least one more editing pass. There are quite a number of misused words: “you’re” instead of “your” for one. Some of the dialogue is a little clunky, reading that out loud makes is sound wrong. There are also a couple of disconnects with stated facts in the work that I wonder if they are mistakes or are actually plot points. One of these being that Qarinah states that no human could break her skin and yet in her encounter with Renard that happens. As well, Qarinah tells Renard she will kill him, then when he asks to see the real her, she responds that he isn’t going to leave. It just is a bit confusing as she has told him already that he’s “going to die”.

Still, the ending shows promise, there are some really interesting paths to follow, and if the series moves away from Qarinah being a “demon” and instead focuses more on her “changing” or “learning” or even “having what she needs” then I think that will be quite a story to tell. But if all that happens is she falls back into her past and learns nothing, that will be disappointing. There’s more to Qarinah than what she has admitted or accepted. I’d like to see that be.

In spite of the violence, the blood, and the far too cold aspects of Qarinah’s personality, there’s something about her that offers the possibility of change. I hope, as this is what seems to be the first work in a series, that happens. Having her fall back into what she was before after the encounter and needs in this work would be a waste of things.

Qarinah needs to develop. to be more than what she has been so far. There’s a path to that, an interesting one. Perhaps that can be told. I do hope so.