Succubi Image of the Week 410

A Review of Forever Young by Kurt Dysan

A Review of My Dreams Made Real by Cora Cross 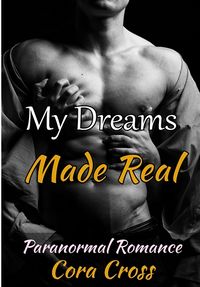 My Dreams Made Real by Cora Cross

The question of what one’s dreams reveal is an interesting one. Sometimes they reveal our own secrets and sometimes we reveal our secrets to others. But is it the secrets that matter or what they lead to that matters more?

Melissa remembers dreams in which a demon appears and seduces her. Finding that the dreams are real, she also learns that the demon is someone she knows. She confronts him and then her dreams aren’t dreams anymore.

Overall the story is a hot flash with some good story to hold it all together. Possibly the most interesting thing in the story is that Jeremy, the Incubus of the work, uses his powers to place Melissa into something called a “dream-spell” which could be thought of, in a way, as sort of being like “sleep-sex”. It’s actually the one thing in the story that gave me pause and that I found myself thinking about a lot when it was mentioned in the story. Almost to the point where the erotica didn’t register for me for a paragraph or two and I had to reread that part of the work again.

The concept of “dream-spell” is one that I would have liked to have seen explored more fully because it’s a very unique power to give an Incubus or Succubus for that matter. I wondered about all sorts of uses for such a spell, what it could do, and in that I think I came up with a half dozen stories that I would love to have seen.

However, the idea really isn’t used as much as it could have been. It’s shown, fleetingly, and mentioned, once. Otherwise it languishes in the background as an explanation about what happened and nothing more.

The story, for the most part, is Melissa discovering what has been happening, finding out that Incubi are real, then realizing that the Incubus is someone she knows, and then going to see him. This takes up a good two-thirds of the work before the confrontation arrives and the heat of the story comes into play.

Jeremy, revealed in his true form. isn’t quite a “normal” looking Incubus, and as well he states that he needs sex to survive, and has as much of a crush on Melissa as she had on him. He has horns and a tail, but grey skin. He’s unique, and I thought that his personality reflected that uniqueness well.

The erotica itself is mostly teasing by Melissa before things become heated between them. The scene itself is a bit lacking on heat, but does otherwise set up some interesting ideas and situations had the author continued with them.

And that’s really the main problem here. There’s a lot of good story ideas, a lot of good characters, events, and action that could lead towards a longer, better story. But it doesn’t get there. The work stops at a point that promises more for the characters, but is never seen. It would be interesting if that was, to see what happens between Melissa and Jeremy going forwards in their relationship.

The work needs some editing, there are some sentences that simply don’t work in the form they appear, others that seem to be missing a word. The idea of a dream-spell is one that I did like and would have liked to see more of. Actually there’s a lot more than I would have liked to see, considering all of the build up to the reveal, and it would have been nice for that to unfold.