A Review of My Professor Summoned an Incubus! by Thorn and Nin

The look on the model says everything about the costume… 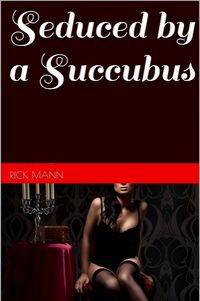 Seduced by a Succubus by Rick Mann

Book blurbs are a tricky thing by far. Their purpose is, of course, to make one want to read the story, to tease something good from whatever the work is. It can also leave a misunderstanding… unrealized expectations… and sometimes a lot of disappointment.

Jamie is a college student who’s desperate to become the kind of man he wishes he was. He is willing to do anything, even jeopardize his immortal soul — when a demonic succubus makes Jamie an offer he can’t refuse, Jamie’s in for a wild ride!

The first thing that has to be said is that the book summary is somewhat misleading in a lot of ways. The work seems to be interesting, and should be, but really as a whole the story involves Jamie getting caught in a web of lies and deceit which end in really a sad story and ending as a whole.

Lilith, the Succubus of the work, is less of a Succubus than a manipulator. She, in short, uses him for her own ends and then sets him up to take the fall for his actions. There’s really nothing erotic in the work, though it tries to be at the beginning, and that’s the problem. The opening chapter gives a hint that this could be a really interesting story and it should be. But what happens instead is that we don’t really see Lilith using her powers, resorting to that which humans have created in order to have an event transpire which leads to Jamie’s downfall and rather unsurprising end.

There really wasn’t much in the way of character development, the work going from short moment to short moment and then ending with Lilith telling Jamie what his future will be. It’s more about someone going off the rails in judgement and as such Lilith could be taken right out of the story and Jamie could be talking to himself.

The writing was a bit uneven at times, and at the end of the story, though it likely was supposed to be that way, Lilith misspeaks Jamie’s name and that bothered me. At several points in the story I found it difficult to continue reading and that was mostly caused by how indifferent I was to both of the main characters. I needed to be involved with them and their story and it just didn’t play out that way for me. For some it might… But I just came to the end of the work and didn’t.