A Dog’s Tale by JHB

A Review of My Professor Summoned an Incubus! by Thorn and Nin 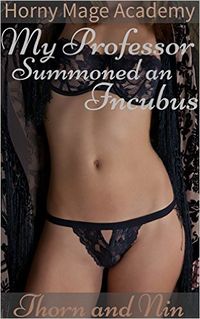 My Professor Summoned an Incubus! by Thorn and Nin

A review of a work in a series that I haven’t read, save of this work, mainly because this is the only work that has a succubus or an incubus appearing as a character. It’s a little difficult to do so, not knowing the past of the series, or the characters of course. But sometimes there are moments which give one pause and make one wonder.

If the point of learning one’s craft is to be better at it, then one should be allowed to do so, especially by one’s teachers. Trust is important and it when it is sometimes stretched to the limit, then things happen. Many times for all involved to be not in the ways they expected, but it can be what they desire.

Clumsy Miya is always getting into trouble in her summoning classes. When her combat professor offers to give her remedial lessons she gladly accepts, but has she bitten off more than she can chew when her professor loses control of his pet incubus?

Miya has all kinds of problems in summoning creatures to do battle, her professor pushes her to do better, but one too many cute creatures means that a lesson needs to be taught. An incubus should do that, and if Miya happens to find herself in the clutches of her professor as well, then that’s not a problem either.

When the “attack” is over, there comes another session which doesn’t really move the story further along as a whole. The conclusion of the story is when a succubus appears and then things get well over the top with what happens to Miya and the other characters. The ending of the work is both cute and funny, perhaps even a little poetic as well.

But as for character development, there isn’t all that much to speak of. Miya’s professor doesn’t change, Miya doesn’t really progress much, save for changing her focus of what she is learning towards something a little less cute. But this alone isn’t enough. The succubus and incubus are really minor characters that lead into Miya discovering what they can do.

I would have liked more story than there was, but the erotica takes over much of the work and in doing so there’s little left for something else to happen. The thing is the little bits of story around Miya and her professor were interesting, but they only really served to introduce the characters and put them into a situation with but a singular purpose.

There is cute, there is some plot, but the erotica overwhelms both. Some better balance I think would make things better by far.