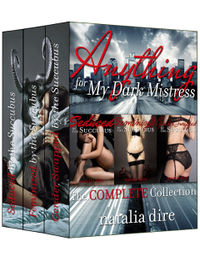 Anything for My Dark Mistress series by Natalia Dire

A review of the Anything for My Dark Mistress series by Natalia Dire today no the Tale. It should be noted, from the start, that this series had been previously released by this author under the series title My Infernal Mistress. Both works are essentially the same series, with some changes in length of the individual stories between the two.

Making deals with a Succubus should never be taken lightly, for certainly the Succubus herself will not. The thing to keep in mind is that sometimes in the end the deal turns out to be more than you expected it to be…

All three “Anything for My Dark Mistress” stories, now available in an exclusive, omnibus collection. This hot-as-hell, 18,000+ word story collection is packed with spicy succubus seduction, steamy gender swapping, and the sublime surrender of mind, body and soul.

As I usually do with collected series, I will review each of the works and then the series as a whole.

Seduced by the Succubus:  Seth answers an ad for a model shoot and finds himself in the presence of a captivating woman. When he enters her lair, he discovers that getting his picture taken is but a formality in the eyes of Seshinu who has something else in mind for him.

The first work in the series is a mixture of seduction, mind control and really quite an interesting Succubus. Seshinu’s human form is deliciously sensuous and when Seth comes into her spell it is done in a way that isn’t “forced” so much as what happens just seems to be right, regardless of what Seth might have thought before about doing such things. As Seshinu weaves her power over Seth, she makes hints to him about what is to come, but when it is clear that Seth is quite happy to succumb to her, Seshinu’s true form appears and at that point it’s quite clear that she is a Succubus, if it wasn’t in the moments before.

But she isn’t stereotypical and the story doesn’t end in a sad way at this point as many such stories do. She changes her mind, enthrals Seth, and then returns with him back to where their encounter started. When Seshinu reveals what she wants from Seth, what her plans are, he is more than willing to obey her will, whatever that may be which sets up the rest of the series really nicely.

Seshinu’s history is touched on slightly in this work, which is interesting on its own, but also the hints about her name being from the time of Babylon brings up several questions about her as well. While having horns and a tail, as I do like Succubi having, she has a grey skin tone and I didn’t really think too much about that part of her. But setting that small thing aside, she’s a complete character with history, personality, and a purpose. All of which makes for a good start to the series.

The erotica is nicely hot, mixing a bit of mind control, female dominance, male submission and, of course, a seductive Succubus that knows her powers and how to use them. Seshinu isn’t cruel or evil in the work, more than anything she’s simply very dominant, which Seth desires and gives himself to. The story leading to the reveal about Seshinu and the erotica is really well done and sets up the rest of the story quite well.

I enjoyed the work as a whole and as it is part of a longer series, my usual problem with shorter works that offer so much and then don’t go anywhere with things doesn’t apply here. I would have liked to see a bit more about Seth in the moments before Seshinu appeared for one however. The other thing that I think would have been nice would have been the work not ending as abruptly as it did. Going from passionate encounter, to being the thrall of a Succubus, to then being told to rest as Seshinu leaves Seth behind seems like things were rushed a bit. There were also a few minor spelling and grammar mistakes that I caught that need to be dealt with, something that happens as well in the series as a whole.

A solid beginning to the series, quite enjoyable, and as such I had high hopes for the series going forwards in the second work.

Feminized by the Succubus: Seth awakens to find himself alone, waiting for his mistress to return. He also discovers that he is now a she, taking the name Beth. A need for pizza is turned into a command by Seshinu to seduce the pizza girl, Amy, for her, which turns into an experience neither Beth, nor Amy will soon forget.

Seshinu’s gift to Seth is that she has transformed him into her servant, and sets Beth on her first task which is to seduce the pizza delivery girl that is arriving soon. After her transformation and playing with her new form, Beth muses about her Mistress and finds out a bit more about her. But before that can really go anywhere, Amy appears, the two start off talking and then Beth seduces Amy as her Mistress commanded.

The transformation isn’t played out in the story, having occurred between the first and second works, but the aftermath is told through Beth’s eyes. There is some self-exporation that takes up a lot of the story, but when Seshinu makes her appearance, then things settle into the erotica of the work. The scene between Amy and Beth is lovely and hot, and seemed to fit into Beth discovering herself and Amy’s needs as well.

I felt that the beginning of the work spent too much time telling all of the things that happened in the first work. There was a lot of time spent dwelling on the past by Seth and it didn’t really add anything to this part of the series. I do understand that some readers might come into this work and series here, and as such some background is needed. But spending about one quarter of this work recapping I think was too much and didn’t need to be. It felt very much like an info dump and that hurt the story as a whole. It might have been better to have the flashback as a memory that Seth thinks of when he talks to Seshinu during the work.

The work is, however, a good bridge between the first and third books and helps to connect them together well. It also provides some more hints about what is coming in the future with respect to Seshinu’s true purpose. But that hint tends to reveal I think a bit too much and perhaps some of the surprise might have been better not told in this work.

A bit weaker than the first work and I think that’s mainly to the editing mistakes in this work that took some of the heat out of things. Again, it reveals more about Seshinu and in doing so sets up the final work in the series.

Gender Swapped by the Succubus: Seshinu returns after Beth has performed her duties and seems to be pleased with her. However, she also brings the news that Seth’s friend is coming to look for him and Seshinu wants Beth to seduce him as well. Beth obeys her Mistress before Seshinu reveals to Beth all that she really is.

In the prior work Beth found the pleasures of being a woman with a woman and in this work, she is put into a situation where she must seduce a man… and it’s someone she knows. This brings up all sorts of conflict within her, and at the same time she must obey her Mistress. How she manages to take control of the situation, to deal with questions that shouldn’t be asked, or answered for that matter, is telling in how she’s changed from the beginning of the work. At the end, when Seshinu reveals the truth to her, Beth’s change in personality and purpose is complete and there seems to be closure in her character, at least from understanding who she is at least.

Seshinu appears after only being fleetingly in the part before and sets up the story to be told. It’s a bit violent, not quite so seductive as it was in the first part of the work and seems to show her true personality which, as a whole, is a bit disappointing. I had expected more from her and when the conclusion of the work arrives and she reveals who she really is, what her plans are and so on… It’s not quite stereotypical, but comes very close. Her character takes a turn, which is foreshadowed in the previous work, and while there is good reason for this happening and makes some sense, I was disappointed in that moment.

The erotica is split into two parts, one with Beth seducing her ex-roommate and then the other which has Beth submitting to Seshinu’s will. There are some echoes between the two and both are hot little flashes on their own. But in both cases they are slightly violent at times and when that happened I didn’t care for those moments much.

What did interest me was that Beth started to use some of the powers that Seshinu had given her in this work, and while the use of mind control is very short and momentary, it did leave things open for another work in the series as many other things did as well.

This work brings the series to a reasonably good closure, though it leaves quite a number of questions unanswered at the end of the work. As the work comes to that close, the things mentioned in passing, the acts that Seshinu performs, all seem to lead towards what should be a fourth work in the series, but that never happened. As such, all of the set up leaves a want for the “what comes next” that never does.

There are a number of spelling errors and as well there are some odd characters ‘=’ being one of them. that pop up throughout this part of the series. Again, more than anything, a good proofreading would have taken care of a lot of issues in that respect.

The Anything for My Dark Mistress Series:  Overall the series is well written and there is quite a lot to like in Seth/Beth as as well Seshinu overall. There are some lovely hot erotic flashes in the story and there is enough story tying those parts together as a whole. The only real problems are a need for more proof reading, that issue runs throughout the work and needs dealing with. The other is that the recapping at the beginning of each of the parts need not be so long or detailed, making them info dumps. The work ends on a note that seems to say there is more to be told in this universe, about what happens to Beth in the future and what Seshinu’s plans are.

That the series does end on that note is a bit of a shame as really if so much could happen, then why not continue forwards and tell that story fully? With all of the promise in the work when it comes to a close… that seems to be the real shame here.

I’ll give the series as a whole three and a half out of five pitchforks.