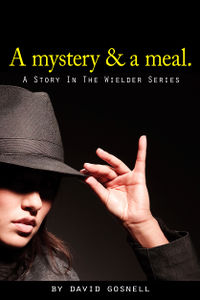 A mystery & a meal. by David Gosnell

it has been some time since David Gosnell published a work in The Wielder series, and I was really quite pleased to receive a copy of his latest work in my email the other day. The series is one of my favourites by far and, of course, Silithes, the main Succubus of the series has always fascinated me with the mystery that surrounds her and how tightly she holds that to her.

The work that was released is one that focuses on Silithes for the most part, though the other characters in the series also make their appearances as well. Being that Silithes is such an enigma for the characters in the series, to have a story that speaks to her, who she is, and what her feelings are about herself, Arthur, and the world around her, told many things that weren’t said before in the series.

Like, for example, Silithes fears something and she sees it in the mirror every day.

Silithes is a succubus on a mission. She’s out to find out who the sick freak is who’s been killing women in her town of New Orleans. And once she finds out who he is, she’s going to make a meal out of him.

That is, unless he gets her first.

Silithes’ mission takes on a different complexion when a young girl’s life is on the line. The clock is ticking and this mystery has to be solved because now it’s about more than just a nice snack.

Silithes finds a mystery that, at first, seems to be a matter of finding someone doing evil and getting rid of them in her own way with her Wielder’s permission. But what she begins to put the pieces of the mystery together she finds that things aren’t as simple as they might be. What’s worse is that in finding the solution she has to face something she never expected to. Herself.

This work falls between the first book Betrayal and the second Sworn Vengeance in the series and as such it connects well to both sides of the series and doesn’t feel out of place. Being where is does fall into the series, there is a bit of foreshadowing to the later works in the series, but that is done very lightly and doesn’t intrude on how things are at the time of this story about Silithes. There is the friction between herself and Arthur, the issues she has with the other summonlings that Arthur has with him. It is a bit hard to see Arthur’s attitude towards Silithes at times, but things have to be that way because that’s how things were.

The work is told from Silithes’ perspective and in doing so her thoughts come out very clearly and I liked that a lot. I thought it was a wonderful thing to be able to “hear” her thoughts. To understand why she did things in the way she did so. Even being able to listen to her internal monologue, the occasional eye-rolling comment at the universe was an amazing touch. But more than that, to read of her fears, of all of the things that haunt her was far more telling. It is, at times, a stark contrast between the Silithes the world sees and who she really is.

The work is very much a detective-mystery with a very strong Succubus slant to the story, but even so, being as it was made complete sense. Silithes didn’t act out of character, her motives held true to her character. There are a few points at which there is some lovely Succubus mind control or influence told and that was true to Silithes as well. Silithes shows something that has been obvious from the beginning of the series and that is she is far more intelligent than many expect her to be. Not in a evil way, but simply that is who she is and she is very good at being able to use her abilities to get what she needed… even if there is one that she cannot have and cannot completely understand why.

That is until a moment in the work where Silithes sees exactly what others see in her and when she does that is a very strong and telling point in her character’s development. Her reaction, what she comes to decide upon changes her and in doing so the next work in the series makes a lot of sense in a lot of ways.

Well written as always, the story moves from chapter to chapter well, there are very few mistakes in the work, a very few minor word errors here and there, but they are far and few between. The emotional attachment to Silithes and the other characters is very strong, the plot is well suited to tell this story about Silithes as well. Overall, I think this well might be my favourite work in the series so far.

A work that, at last, allows a good look into who Silithes is, what her thoughts are, and in the most important way, doesn’t allow her to hide her own truth. Something very special, well enjoyed and offers a glimpse into one of the deepest mysteries of the series. For that, most of all, a captivating read that I recommend.