Succubi Image of the Week 409

A Review of Succubus Week: Wednesday by Lisbet Laire 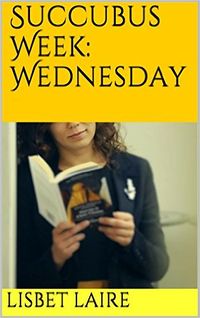 Throughout this series so far, I have one single overriding question that, since it was mentioned, hasn’t been paid off on. That being who Adrienne’s mother is. Now this is, I admit a minor thing, but it bothers me quite a lot that it wasn’t delved into very much. So, going into the third work in the series, I hoped that something would be revealed. When an author sets up such an obvious hook, one expects it to be paid off sometime after all.

Succubus Adrienne is on the hunt for a murderer, sent home to get some rest before a stake out she first goes to pick up a book from a rare books dealer. The shop keeper is a beautiful young woman and so Adrienne decides it can’t help to have a feed. . .

Adrienne deals with pushing paper in her office while working on a case before leaving for the day and some rest. A detour to pick up a book as part of the search leads to a small bookstore where the book awaits and the woman there awaits Adrienne’s pleasures too.

The work reads as a short vignette between two larger events in Adrienne’s week, a pause in-between all that has been happening. The most interesting thing about this work is the short little glimpse of Adrienne’s office, what she is involved in, and the people there. It brings a lot of colour to the series and I did like that.

Along with the view of Adrienne’s day, it’s becoming clear that things are wearing on her, to a very large extent, and with that comes a bit more about Adrienne herself that I liked to see. Once out of her office and into the core plot of this work, the building of Adrienne’s character takes an abrupt turn when she enters the bookstore and meets Evie. Upon their meeting, Adrienne’s succubus needs come to the fore and all sense of plot is pushed aside for a lovely erotic scene between the two of them. Like the previous works in the series, Adrienne is a joyfully passionate succubus, she isn’t stereotypical and in being so the scene is refreshing awkward at times that did make me smile.

But in spite of what I liked about this work, there was too much idling really. The purpose of this work seemed to be in connecting the prior work in the series and the next one to come. Beyond that, Adrienne’s mother remains still a mystery and being that in the prior work that was very much in Adrienne’s mind, I was disappointed in that particular plot point not going anywhere. I feel like it was an opportunity lost to know more about Adrienne and her past and I do wish this had happened in this work.

The writing is excellent as it has been throughout the series, the erotica is lovely, passionate and hot. But still it felt like this was a bridge and not a lot more. I wish it had been what I had hoped for.

A pause more than anything else though learning a bit more about Adrienne’s place of work was interesting. Nothing really much otherwise transpired and there’s still nothing said about Adrienne’s mother after being mentioned so much. Thursday is next in the series, and it seems to be that Adrienne will be on a stake out. I am curious to see how that unfolds, but more so, I’d like to see more about Adrienne herself than has been. There’s more to her than the succubus she is, that needs to balance out the erotica more than it has been.