A Review of Succubus Week: Wednesday by Lisbet Laire 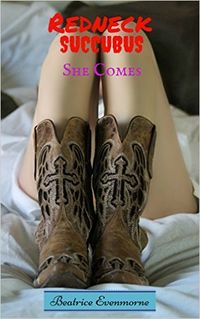 A short time ago I reviewed two works in a series called Redneck Succubus here on the Tale. You can the first review here and the second book’s review can be found here. Overall, the series has left me wanting for quite a number of things, some of them being the background to how things have unfolded for one, but more in that I have been hoping for something that wasn’t stereotypically “evil”.

The final work in this series was recently released and, sadly, things continue to be as stereotypical as ever. There is such a thing as “bad things happening” of course, but in the same vein, there’s better stories to tell than simply a succubus having her way and leaving ashes in her wake.

Krissy’s taken out her revenge on Larry. He doesn’t want to accept the new “her,” but soon a woman will show Larry exactly what it means to be a woman. Until that happens, Krissy doesn’t know what to do with herself, that is until she finds two muscled men who know exactly what to do. But she’s got a strange feeling that something else inside her is driving her actions. What will happen when those actions come to fruition?

Krissy’s hunger is getting the best of her and as it does so she finds herself taking others, and not leaving much behind. Encountering Larry after his transformation, Krissy cannot help but have her way. But is it all Krissy’s doing or is someone else pulling the strings?

The work focuses on, mainly once again, the sexual encounters that Krissy has and as well Larry after his transformation Krissy uses her powers to claim more of those around her, leaving ashes behind as she has before. There is a moment however in which she tries to control herself, but that is fleeting and most of what transpires has happened before and will, of course, happen again.

The work ends in a way that could have been really interesting, but rather than take the story onwards into a situation where the truth of all that happened comes out, the author takes the story to an abrupt, two sentence ending that is very disappointing. There’s a mystery that is offered at the last page without a name, without explanation, and then, before anything more is told the work ends on a decisive note.

In a way, how this work ends, and the series for that matter, shouldn’t have been a surprise considering how the previous works did, how the individual scenes focused on the sex and walked away from the story. Rather than expand on the story, to answer the questions that Krissy has, or even try to take the work in a new direction with the appearance of a new character, the work runs headlong into a brick wall and comes to an end.

It is a very unsatisfying ending because what happens is completely stereotypical and it didn’t need to be. I could see a way to continue onwards, but with how things ended there’s really no point in doing so. It felt like the author gave up on things just at the point where there was something more than simply sex going on.

A disappointing ending to the series when there was a way to continue onwards and tell a larger, more interesting story than one of revenge and what it can do when one has the power.