A Review of Taken by the Fiery Demon by Lucey Fur

A Review of the Jacie Series by A. Del 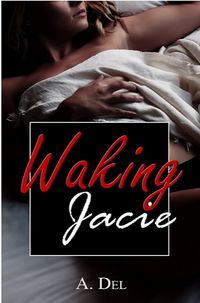 Waking Jacie by A. Del

It is never quite a simple thing to put an idea into words. Turning those words into a story, having it make sense isn’t much easier. When that story turns towards erotica, the temptation sometimes is very great to leave a lot of the story behind for the erotica.

Trying to tell a story in a very few pages doesn’t often work. There’s background to be told, personalities to show and in the end, there has to be something about the main character that’s interesting and holds you in the story.

A review of the Jacie series on the Tale today. Some ups and downs and promise… But for the most part, there’s something missing.

Jacie was no stranger to being different. From her body developing early to simply knowing every dirty emotion her peers ever had towards themselves and others, she could have been the queen bee.

But Jacie’s mother had a dirty little secret, and now Jacie is paying the price for it. Trapped in an unending sleep for three years, it takes a chance encounter between her step-brother and his girlfriend to bring her back to the waking world. Jacie has no choice but to watch as Gavin takes his girlfriend hard and without protection, but even he has his secrets…

Jacie tells of her life, the problems that she has and cannot understand very well. Then her life changes dramatically and she is lost in a coma to her family. Until one day her step-brother and his girlfriend visit her… and then Jacie discovers what she can do… and sees the world through awakened eyes.

Jacie’s powers, her abilities, are very Succubus-like in a lot of ways and in the telling of her past, it’s clear that she knows that something isn’t right about her, but cannot understand what it is. Apparently her mother brought this “curse” to her, but Jacie’s mother is long passed and so she needs to deal with things herself. Telling that story at the beginning of the work does make a connection and it is a very good read as she tells of the things she can sense and knows about others.

Even when Jacie is in a coma, she tells of being there, what it is like, and how it felt, all of which I thought set up some really interesting possibilities. When her step-brother and his girlfriend enter the picture, then Jacie’s powers come into the fore and that leads to the hot flash of the work. The thing is that as a whole the erotica really isn’t all that interesting compared to everything else that Jacie spoke of before, and afterwards. There is purpose to the erotica, which is a device to get Jacie out of her coma… but otherwise I didn’t feel a lot of heat.

The work is short, really much too short by far and leaves many questions about Jacie, her family and more specifically, her mother. There is a lot of mystery to explore about Jacie and that should be interesting to watch unfold as the series continues. It is well written, there wasn’t really anything that took me out of the story by any means. I just felt like the erotica was a bit of an afterthought and that bothered me.

The work has a lot of promise at the beginning, but then moves into a hot flash that really isn’t all that hot as a whole. 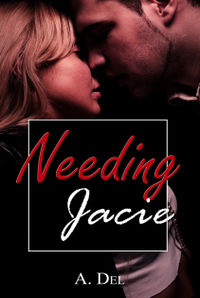 Needing Jacie by A. Del.

However, the hints about Jacie, what she is, and what she can do offers the possibility that this series could become something more than it seems… We’ll see if that happens.

The question of how a series continues is one that can work well sometimes is the story is good and the characters have something to say. It is a lot less so when the story revolves around sex and not a lot of story. Heat alone isn’t really a story by itself.

There needs to be a reason why things happen as they do in a story. Not the answer, but at least an idea of why things as they are.

Jacie’s life has become a whirlwind of passionate encounters in the most thrilling of places, but she hasn’t quite recovered fully since her waking. When an illicit encounter leaves her thrilled yet unfulfilled, she returns to her sanctuary, only to find that not all is as it should be.

When the young man of the house, her most trusted companion, decides that he’ll work out his anger on the newly promiscuous succubus, Jacie is introduced to the darker side of her new life – where even those she’s loved forever will take all that she offers to others – whether she likes it or not!

Jacie has been going around town since she awoke, trying to scratch an itch that she can’t manage to fulfill. She has a night of sex, a rough moment in an alleyway, and then she comes home to what her stepbrother has become in the aftermath of her awakening.

In the second work, it still isn’t clear that Jacie is a succubus. She has no idea really why she is running around and having sex with every man she comes into contact with. Really the reason for why she does isn’t clear, isn’t explored, and save for the little mention in the book blurb, there isn’t any sign of Jacie actually being a succubus.

Beyond this, there is a story, which is nibbled at, but doesn’t really go anywhere. There’s a hint that the stranger that Jacie meets before she goes home is important to the story, but that indication is fleeting at best. The larger story is what happened to Jacie’s stepbrother and as the core of this story, it’s really a tragic thing. From the first work to this one there’s been a huge change in his personality and more. It is a sharp contrast between who he is now, and who he was. It’s explored, in a round about way, but really might have been delved into further. Things come to a head, things happen, and then his story peters out suddenly.

In spite of this, some important things are said which tend to drive the story forwards, to try to place the underpinning of Jacie being a Succubus, but, again, you have to be looking for them in order to see them. Otherwise the story really seems to be about a woman that needs sex, badly, and gets that anyway she can.

The writing itself is good, the characters have personality, but really didn’t develop all that much in this work. The balance was towards Jacie’s sexual encounters over story as a whole and that’s a shame as there needs to be more story. With any luck in the next work Jacie will be revealed, or told, or sees, what she is. It also would be nice to know more about her past, especially her mother, which I think needs to be told as well. I realize that sex sells, but story does more and there is a story here that’s trying to get out from under the erotica and I hope is does.

This work was more sex than story, but there is a story lurking underneath. Like the first work, that’s the problem. Tell the story, explain why things are happening as they are, and then what comes next will make more sense. At this point it’s not quite managing that.